Augusta celebrates annual rodeo, a month after flooding postponed it 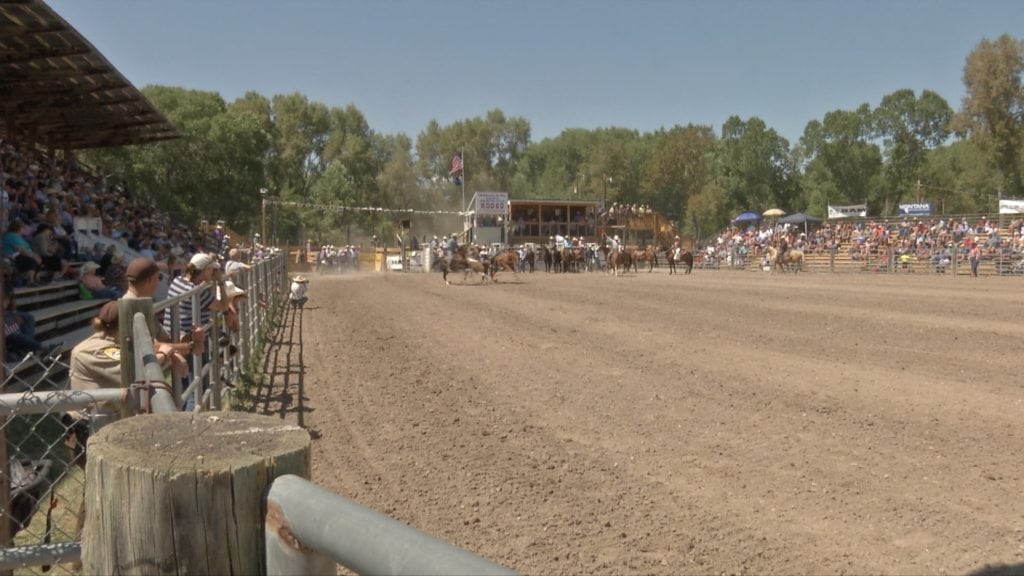 Spectators then watched dozens of top cowboys and cowgirls from the PRCA Montana circuit, riding and roping in hopes of earning a prize buckle.

Chad Schearer has been coming to the rodeo in Augusta for more than 25 years. He and his wife Marsha came in from Belt to watch the event.

“We’ve got a lot of friends that are participating today, and we’re cheering them on,” he said. “We also have some of our family from South Carolina coming in, and so for our nieces, it’s going to be their first rodeo.”

Nothing at this rodeo was out of the ordinary — except the date. The event had been scheduled for June 24. But with less than a week to go, Augusta was hit with serious flooding. The rodeo grounds were heavily damaged.

“We had a river running through the gate right behind us,” said Ben Arps, chairman of the Augusta rodeo committee.

At one point, organizers estimate the arena was under nearly three feet of water. They decided there was simply no way the event could be held that weekend.

Arps, who has been organizing the rodeo for more than 30 years, said this was the first time he knows of that the rodeo had to be postponed. He said some other communities offered to let Augusta use their rodeo grounds, but he declined.

“It was great for them to offer, but we’ve got to have it in our own spot,” he said.

So the American Legion and others in the community set to work, hauling in material and making repairs. Arps said it was a team effort to get the grounds ready.

“We had Boy Scout troops come and put a long day in helping us, a lot of volunteers come and help us,” he said. “We got it done. It took some doing, but…”

In the end, the postponement didn’t keep the crowds away. July 22 was a rare available date, with no other PRCA rodeo in Montana, so many competitors were able to make it despite the change in schedule. On Rodeo Sunday, you could see cars and horse trailers lined up all the way along U.S. Highway 287 coming into Augusta.

“It’s amazing how this community just came together and just transformed this whole city back to where we could have the rodeo here today,” said Marsha Schearer. “Hats off, they did a great job.”

Arps said it showed how the Augusta community has rallied since the flooding.

“Small-town people come together and help each other,” he said. “It all worked out.”

The rodeo announcer summed up the general sentiment in his introduction.

“Regardless of whatever happens, Rodeo Augusta will always happen,” he told the crowd.