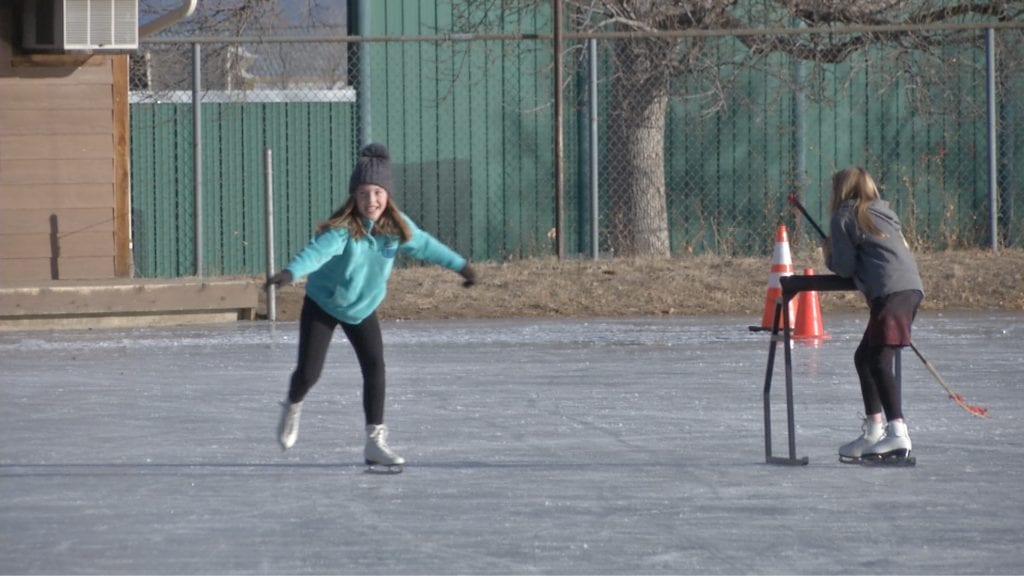 (HELENA) This weekend, people of all ages made their way to Helena’s Memorial Park for some outdoor winter fun. Helena Parks and Recreation opened up the Memorial Park Ice Rink and Warming House for the first weekend of skating this year.

Some of those who hit the ice were practicing hockey shots, while others were simply making their way around the rink.

“What I mostly liked is, it’s kind of like you’re floating on clouds, except it’s solid,” said 8-year-old Luther Hunthausen. “But you’re moving, and you can’t fall – unless you go on a bump.”

Luther and his 5-year-old sister Klara were skating with their grandmother, Tami Scott.

“We started skating here when their mother was a little girl, back in the 90s,” said Scott. “Last winter we came out for the first time, and they spent quite a few days learning to skate.”

Parks and Recreation filled the rink in with water several weeks ago, then let it freeze. Recreation supervisor Lydia Sakowski said they originally hoped to have it open for skating by last weekend, but the overnight temperatures hadn’t been cool enough for the ice to be fully set up.

While the mild weather delayed the first open weekend, it made for good skating conditions.

Sakowski said things were relatively quiet when the rink opened up on Saturday, but that Sunday seemed to be a busier day.

“I’m happy to see more people are coming by it, and I’m hopeful as the season goes on more people will get out and enjoy the ice rink,” she said.

For their part, Luther and Klara are planning to be back.

“We’ll hope to come back as many times as the weather allows,” said Scott.

Sakowski said Helena Parks and Recreation will keep the rink open as long as the weather cooperates. She said it usually remains open until mid-February.