(LINCOLN) Sunday brought some heavy snow to the Lincoln area, but that was no obstacle for what has become a winter tradition: the third annual Skijor Lincoln.

“We were just happy it didn’t rain, because that was in the forecast,” said Laurie Richards, president of the Lincoln Valley Chamber of Commerce.

On Saturday and Sunday, dozens of spectators gathered west of town to watch skijoring, a unique and fast-paced winter sport. A horse and rider race around a track, pulling along a skier traveling on a specially built snow course. The skier must maneuver around gates, go over jumps and contend with other obstacles.

Richard Weber, a skijoring rider from Ridgway, Colorado, said strategy and teamwork are key in the sport.

“You have to stay close enough to the track where your skier has a chance, but far enough away that your horse doesn’t run as far, so you can get a faster time than everybody else,” he said. “It’s really tricky on a round track, but it’s fun, it’s a challenge.”

About 75 rider and skier teams signed up to compete in Lincoln this weekend. Weber and other top riders could reach speeds of up to 30 miles an hour on that type of track, which includes a large curve.

While the top teams are a major attraction, Skijor Lincoln featured races for every speed and skill level. The track was designed to be accessible to experienced racers and novices alike.

Adam Rys-Sikora, president of Skijoring America, said his organization works to help provide opportunities for people interested in the sport.

“We call them ‘weekend warriors,’” he said. “It does encourage a lot of new racers and local people in the community who just want to try it out.”

Skijor Lincoln began when Skijoring America leaders contacted the chamber of commerce and asked if they would be interested in sponsoring a race in Lincoln.

“We had never heard of it,” said Richards. “So we went online and Youtubed it, and we watched it and thought, ‘This would be a great winter sport for Lincoln.’”

Since then, organizers say the event has thrived. Rys-Sikora said they’ve seen a surge in interest in skijoring.

“Just the amount of people coming to these races seems like it’s doubled every year,” he said. “It’s gotten very popular. It’s a great wintertime thing to do with your horse, it’s a really good family event, everybody has a lot of fun.”

In addition to the fun, Richards said the skijoring races provide a boost for Lincoln’s economy.

“Our winter is our slow months, so it really helps the businesses,” she said. “The motels have no vacancies, the businesses are thriving this weekend.”

This year, the track was created in a new location, on land donated by local business owner Bill Cyr. Richards said that made for another learning experience.

“Each year, I think is getting better,” she said. “We’re learning a lot.”

There wasn’t as much snow on the track as some years, so community volunteers collected snow from the parking lots of businesses around Lincoln and trucked more than 100 loads of it in.

“For me, I like the way our community comes together to do this,” Cyr said.

Lincoln is part of a circuit of skijoring races around Montana and neighboring states. Next weekend, races will be held in Whitefish. There will be events in Bozeman and Big Sky the following two weeks. Skijoring America’s national finals will be held March 9 and 10 in Red Lodge.

While Lincoln’s event isn’t the biggest, organizers and competitors say there is something special about it.

“Lincoln is such a favorite event for us — such a really, really good host committee, great location,” said Rys-Sikora.

“The racers come here because it’s a good time,” said Weber. “We all go out and we go to the different restaurants or the bars and have fun at night. We like the people that are here. It’s a great race.” 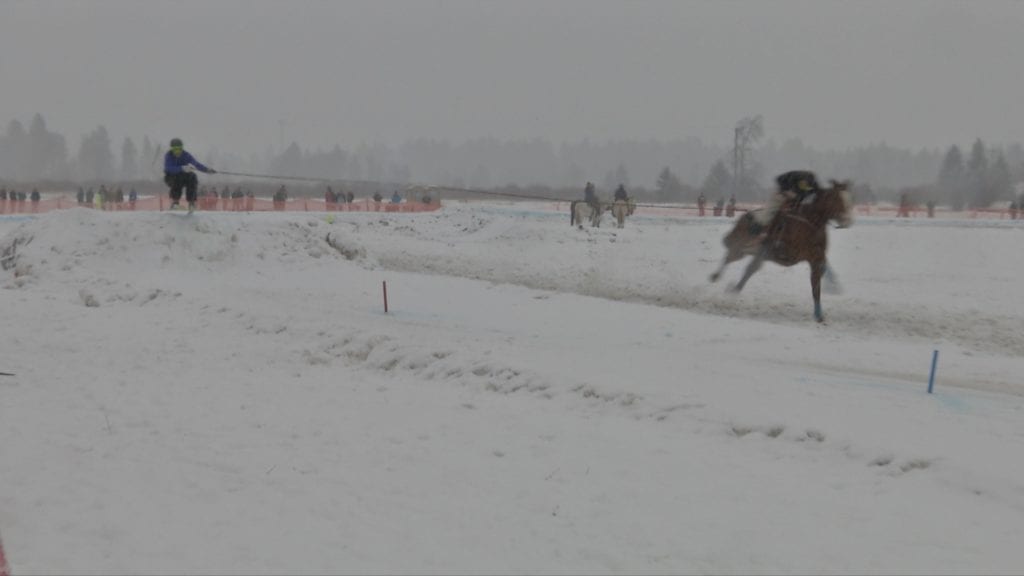