The “Merci Car,” which currently sits just outside Helena at the Montana Military Museum at Fort Harrison, is one of 49 cars that made up the “Gratitude Train.” On Feb. 16, 1949, a French vice-consul officially presented the car full of gifts to the Montana Legislature and Gov. John Bonner, himself a World War II veteran.

“It means a lot to Montana,” said Ray Read, director of the Montana Military Museum.

The Gratitude Train was a gesture in response to the 1947 “Friendship Train,” an effort in which Americans donated millions of dollars’ worth of food, clothing and other supplies to aid recovery in France and other European countries that had been devastated by the war. In return, a French committee came up with the idea of filling a boxcar with gifts and sending it back to the U.S. They ended up collecting more than 50,000 gifts – enough to fill an entire train.

One boxcar was delivered to each of the 48 U.S. states at that time, and another was intended for the District of Columbia and Hawaii. Read said Montana’s car included gifts like clothing, carved pipes, dolls and several living trees. They were distributed to counties around the state.

The boxcar is commonly known as a “40 and 8,” from the idea that it could hold 40 men or 8 horses. Read said many U.S. service members would have ridden in cars like this one in Europe or North Africa during World War I and World War II.

“It has a lot of fond memories,” he said.

Montana’s car was refurbished several times over the decades – often by members of the 40 and 8, an honor society of American veterans. It spent years outside the Montana Historical Society. 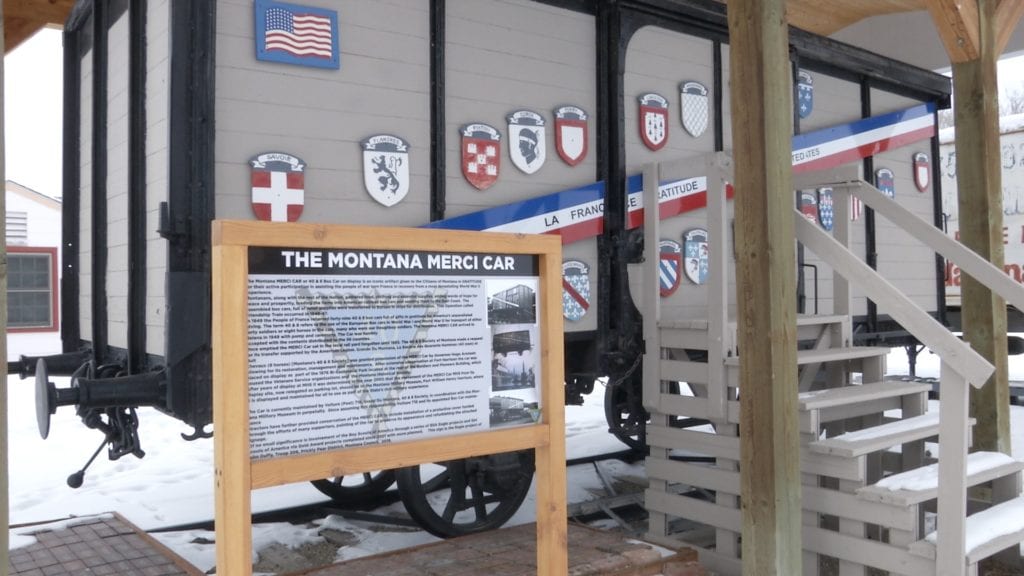 “Finally we just decided that it needed to come to a location where it could be protected and we could manage it on a continuous basis,” said Read.

So, in 2001, the Merci Car moved to the Military Museum. In recent years, they have made a number of efforts to restore it. They built a roof over the car, added a new interpretive sign, and repainted it to better match its original color. They are next planning to cover the plaques featuring coats of arms of French provinces with more historically accurate designs.

Many of the projects have been done with help from local Boy Scouts and Girl Scouts.

You can visit the Merci Car in person at the Montana Military Museum.

“I think it’s one of those things that’s sort of forgotten, but it’s here,” said Read.

When the weather is better, the museum opens up the car, and visitors can see additional exhibits inside.

The museum is open Thursdays from 9 a.m. to 4 p.m. You can also make an appointment to visit on other days by contacting Read. Information is available on the museum’s website.