(HELENA) Over St. Patrick’s Day weekend, the Pipes and Drums of the Black Devils performed about a dozen times around the Helena area, including at Friday’s celebration of Irish heritage at the Montana State Capitol.

The holiday weekend is an opportunity for the band’s members to all perform together. While the group started in Helena and is still based there, the members are now spread over several states.

Beth Foster founded the band in 1998, after moving to Helena from Indiana. She had previously played in the Indianapolis 500 Gordon Pipers. 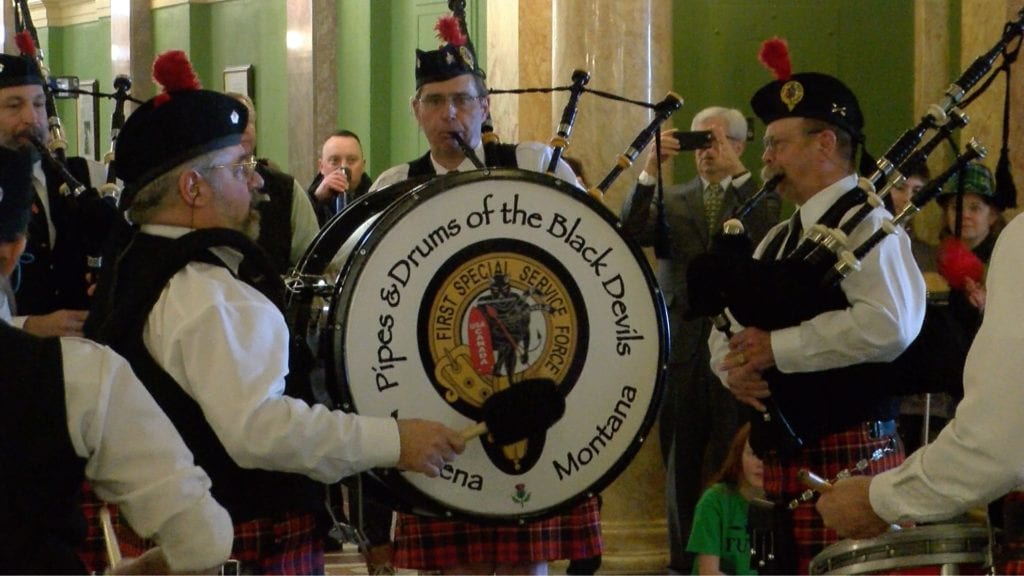 “It’s just a lot more fun to play with people, play with others and have a band,” she said. “So I started looking for pipers and drummers.”

Over the years, the new band made connections with veterans’ groups, as they performed at memorial services and other events.

“It’s very moving and humbling to see the response that you get from those that know what your mission is, why you’re there,” said Eric Fendler, the band’s pipe major.

Those connections led to the group’s biggest role. In 2007, they were elected the official pipe band of the First Special Service Force, an elite World War II unit of American and Canadian soldiers who trained at Helena’s Fort Harrison before winning a series of important victories in Italy and France.

“Personally, for me, I don’t know that there would be a bigger honor,” Fendler said.

The FSSF specialized in unconventional warfare, and the U.S. Army recognizes the unit as a forerunner of the modern Special Forces. The band renamed themselves the Pipes and Drums of the Black Devils, after the nickname given to the unit by German soldiers.

Because of their connection with the FSSF, the band was invited to travel to Italy to take part in celebrations of the 75th anniversary of some of the unit’s victories.

“We are going to be there to represent them,” said Foster.

Fendler went to Italy in January to perform at a ceremony for the landing at Nettuno, part of the larger Battle of Anzio. Band leaders hope to bring 10 or 11 members in the spring, to commemorate the Liberation of Rome. FSSF soldiers were among the first Allied troops to enter the city.

Foster, who also serves as a vice president on the board of the First Special Service Force Association, said they are also hoping a 95-year-old veteran of the FSSF will be able to accompany them to Italy. She said the band is honored by the opportunity to represent these soldiers, and committed to bringing attention to what they accomplished.

“It became, ‘What do we do with this? How can we continue to educate and represent the First Special Service Force?’” she said. “Because at some point, the veterans will be gone.”

The Pipes and Drums of the Black Devils are a registered nonprofit. They are currently seeking donations to help pay for the costs of their trip to Italy.

“We’re just asking for some help to help us represent a part of our history that we can keep alive and honor,” said Foster.

You can find more information about the band, including how you can donate, at their website, www.blackdevilspipeband.com.