(HELENA) On Saturday, about 20 people gathered at the Silos Recreation Area on Canyon Ferry Lake, to bring new life to thousands of discarded Christmas trees from the Helena area.

They began the work of converting the trees into new habitat for fish in the lake. It’s part of the annual “Pines for Perch” program, coordinated by Montana Fish, Wildlife and Parks. Volunteers included members of the Upper Missouri River and Gallatin/Madison chapters of Walleyes Unlimited, as well as other local anglers.

“It’s cool to see everyone come together for an event like this,” said Jim Gillespie, president of the Upper Missouri River Chapter. 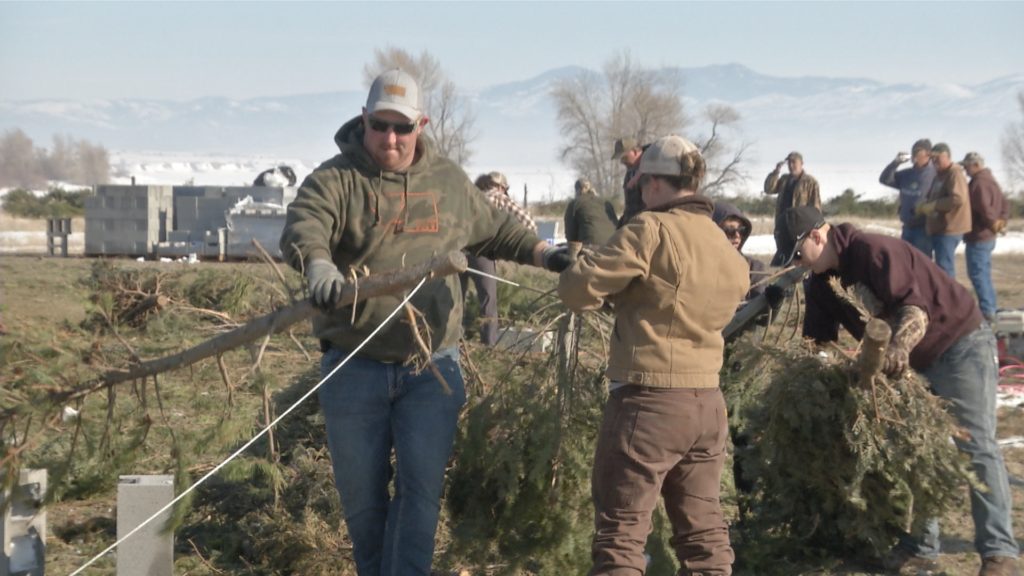 The volunteers drilled holes into the base of each tree, then began stringing them onto long steel cables. Concrete blocks were added to weigh the strings down.

In just over three hours, they had turned a large pile of trees into about 30 strings. The work came with a strong smell of pine.

“You’ll go home and smell nice for a while,” Gillespie said. “You don’t need an air freshener in your vehicle.”

Each year, the City of Helena’s transfer station collects Christmas trees after the holidays, then brings them out to the lake. Chris Hurley, a fisheries technician with FWP, said they typically receive 3,000 to 4,000 trees.

Some of these trees had been brought to the Silos area several weeks ago – before some of the recent storms that hit the area. On Saturday, many of them were still stuck under snow and ice. Volunteers had to bring in heavy equipment to get them loose.

Right now, Canyon Ferry Lake is still covered by a thick layer of ice. But once the water clears, FWP will bring in a helicopter to drop the strings of trees into predetermined locations around the lake. Hurley said it typically happens in late April, but it could be May this year because of the late cold weather.

Yellow perch, a popular game fish, typically spawns – or lays its eggs – around underwater vegetation. But at Canyon Ferry, there is not as much of that vegetation available because the lake level fluctuates widely. The strings of trees can provide an alternative habitat for the perch.

“Hopefully the perch find those structures and lay their eggs out on them,” said Gillespie. “It’s pretty cool when they do. Once they do, then they continue to come back to those same areas.”

Because of that tendency, the strings are placed in roughly the same locations each year. While perch are the only fish likely to use the recycled trees as habitat, other species that feed on perch will forage around them.

Gillespie said he has been taking part in the Pines for Perch program for more than 20 years, and he’s seen clear benefits for Canyon Ferry anglers.

“Without us doing this, the perch numbers just go down,” he said. “Everybody benefits from us doing this. I wish we could do it on a bigger scale, because these look big when you’re standing next to these strings of trees, but you look behind us at the lake and it’s so small in comparison.”

Gillespie said it costs about $6,000 to have a helicopter place the trees. Walleyes Unlimited holds fundraisers throughout the year to support Pines for Perch.

Copyright 2023 Scripps Media, Inc. All rights reserved. This material may not be published, broadcast, rewritten, or redistributed.