(HELENA) On Sunday, the Lewis and Clark County Fairgrounds played host to more than 100 people, bidding on 99 pigs.

A pig-shaped balloon marked the way to Deaton Show Pigs’ seventh annual auction. The pigs up for sale were all born in January. The younger ones were around 20 pounds, while some of the older ones were just under 100 pounds. 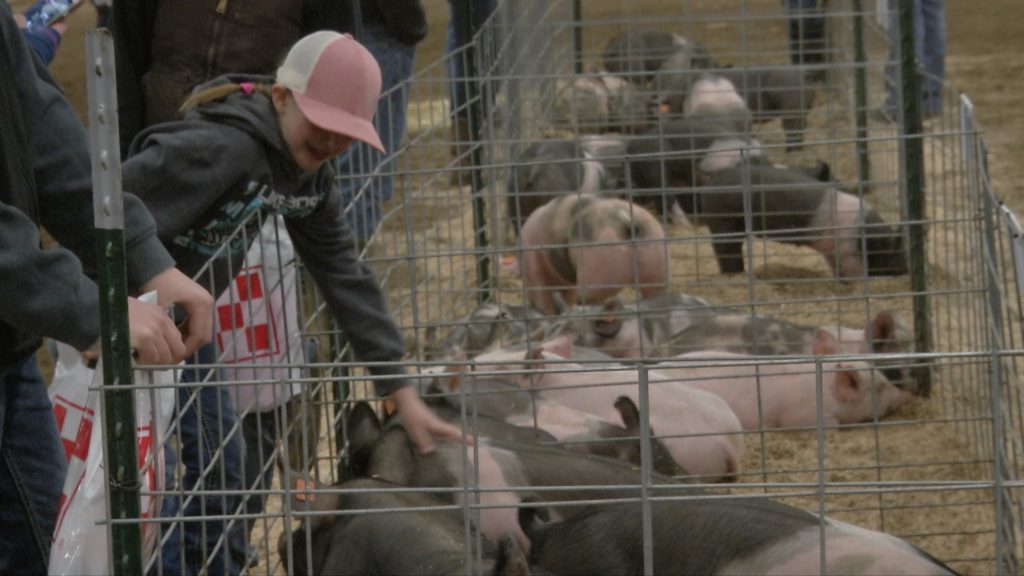 Many of those bidding were students in 4-H programs, looking for top animals they can raise for fairs and other shows coming up later this year. Jay Deaton, owner of Deaton Show Pigs, said that buyers came in from Washington, Idaho and Wyoming as well as Montana.

Deaton said, if you know what to look for, you can already pick out a top pig, even at just two months of age.

“A lot of it is confirmation – how they’re built, their legs, how much muscle they have,” he said. “It’s easy to tell now how they’re going to be later on.”

The kids who buy pigs at the auction still have a lot of work to do to get them fair-ready. By the summer, many of the pigs will weigh close to 300 pounds.

Deaton Show Pigs has already had success. One of the pigs purchased at last year’s auction went on to be named grand champion in the 4-H show at the Last Chance Stampede and Fair in Helena.

Deaton describes the auction as a “family job.” His father conducted the auction, and his mother, siblings and grandparents also helped out.

Deaton said he’s proud of the role they have in getting competitors off to a good start.

“I really like working with the kids,” he said. “We like getting kids their first champions. That’s probably the funnest thing, is when somebody who’s never won a fair wins a show and it just makes them really happy and we like to share in that happiness with them.”