(HELENA) The Helena Ice Arena was busy over the weekend, as 65 teams and more than 400 players competed in the fifth annual Wyatt Winfield Memorial 3-on-3 Hockey Tournament.

Teams came in from around Montana and from outside the state. They included players of all ages and all skill levels – from kids to adults and from novices to former Helena Bighorns players.

“I think we strive for three things – that is, recreation, development of hockey and also sportsmanship,” said Jay Winfield, Wyatt Winfield’s father.

The event is held in honor of Wyatt, a Helena High graduate who was playing for the Bighorns when he was killed in a crash in March 2013.

“A group of us, our teammates, wanted to find a way to honor Wyatt’s legacy and everything that he embodied and believed in,” said Cody Blom, who played youth hockey with Wyatt, then became a Bighorns teammate.

The tournament has grown substantially since the first year, when just ten teams took part. The games were fast-paced, and often high-scoring. While they’re just for fun, that doesn’t mean people aren’t playing hard.

In the top-level Power division, the two teams that reached Sunday’s championship game were mostly made up of people who had played with Wyatt. Blom played on a team called Wyatt’s Wranglers, while Team S.R.C. took its name from Sky Ranch Customs, the metal fabrication business Wyatt had started. It was a rematch of last year’s championship, won by the Wranglers. 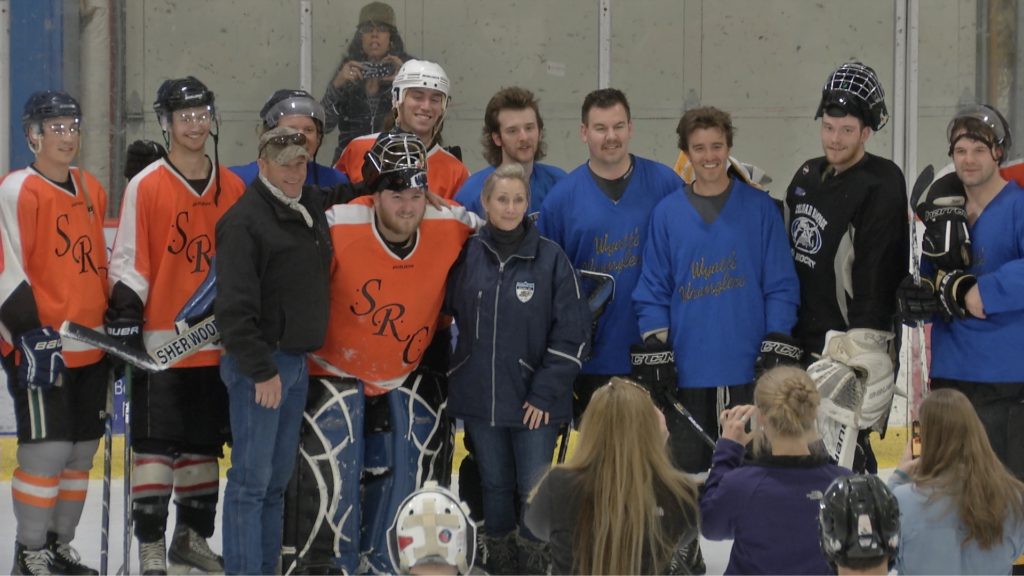 One of the S.R.C. players, Dalton Bowles, had been a “billet brother” of Wyatt’s while playing for the Bighorns, meaning he lived with Wyatt’s family during the season.

“One of the best parts about this tournament is it gets us all back together once a year to hang out and have some fun,” he said.

All the players on Wyatt’s Wranglers and Team S.R.C wore Wyatt’s number, 15. The teams were tied at the end of regulation, and S.R.C. won in a shootout.

“It really couldn’t have ended up any more perfect,” said Bowles.

Bowles now lives in California, and Blom lives in Oregon. This event brings them back together with friends who are now scattered across the country.

The tournament raises money for the Wyatt Winfield Be Tough Memorial Foundation. It supports both youth activities and education in the trades, in honor of Wyatt’s passions for hockey and for welding. Jay Winfield expects this year’s event to raise at least $25,000.

“We want to provide for the youth, so they have opportunities for their future development,” he said.

The foundation has already provided about 20 scholarships, focusing on students planning careers in skilled trades.

Organizers said they couldn’t put together the event without help from many volunteers and sponsors. They thanked spectators, players and everyone else who made the Wyatt Winfield Memorial Tournament possible.

“It’s a good way to get together and celebrate the memories of him and kind of reflect on everything he’s done for us,” Blom said.

Jay Winfield said they are already making plans for next year’s tournament, which will be held at the Helena Ice Arena the last weekend of March.