(HELENA) Barbers were busy Saturday afternoon at the Montana City School gym, as they helped dozens of people “Rock the Bald” to support the fight against childhood cancer.

For the 12th year, Montana City played host to a head-shaving fundraiser for the St. Baldrick’s Foundation. It’s one of more than 1,000 events nationwide where volunteers go bald to raise money and awareness for childhood cancer research.

Ken Kluth, a member of the Montana City Volunteer Fire Department, started organizing the event after his brother sent him a request for a St. Baldrick’s donation.

“The first year, I donated to him,” he said. “The second year he sent me that request, I said, ‘I can do something better than this.’ So I took it to the fire department, and the rest is kind of history.” 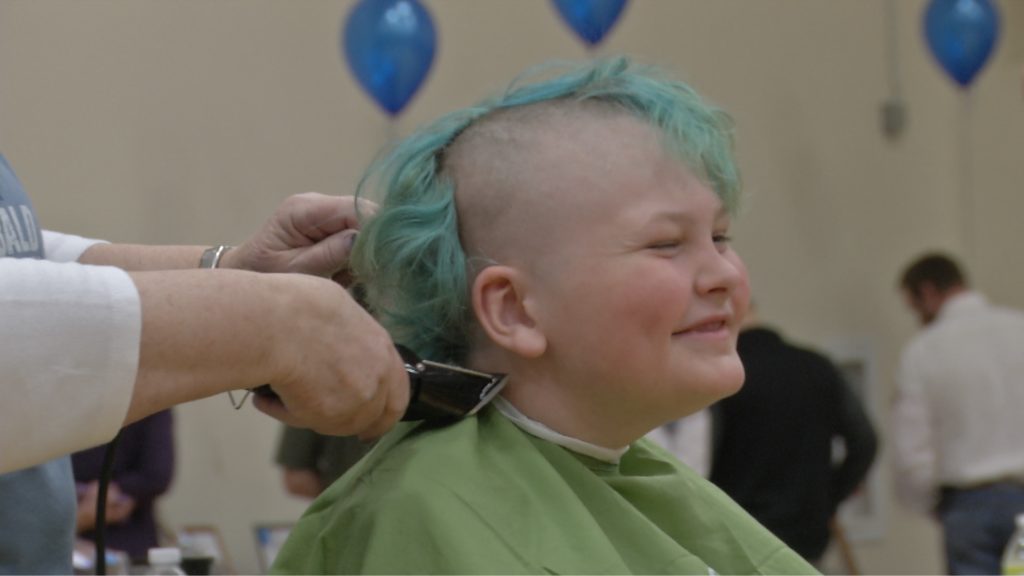 In 2008, they had about 15 shavees, mostly firefighters, and raised $5,600. This year, 42 people signed up to get shaved, and several more walked in. Kluth said they have already collected about $48,000 for the year, and they expect that number to keep going up.

“The support here is unparalleled, I believe,” he said.

On Saturday, organizers honored several of their volunteers as “Knights of the Bald Table,” meaning they have taken part in St. Baldrick’s events for seven years. One of them was James Buchanan, an 11-year-old student at East Helena’s Radley Elementary School. James is a childhood cancer survivor himself, who received an experimental treatment made possible by the kind of research St. Baldrick’s supports.

This year, James was one of a number of shavees who came in with brightly colored hair, though he said he didn’t do it just for the event.

“I just wanted to dye my hair blue, because my favorite color is blue,” he said.

James has an easy answer for why he takes part each year.

“I’m saving kids who had cancer,” he said.

Another of the new “Knights” was Kelly DeLaHunt, the year’s top fundraiser. DeLaHunt – who stands out for the long gray hair and beard he has shaved each year – brought in more than $15,000. He’s collected a total of around $68,000 over the years.

“Kelly’s a rock star; he is unbelievable,” said Kluth. “Chances are you’ve been approached by Kelly for a donation if you live in the Valley.”

Hair stylists from Helena’s Capital Hill Barber Shop and First Impressions Salon volunteered their time to do the shaving. Several of them have been taking part in the fundraiser since it began.

“It’s very impressive who the people have stuck with this event,” Kluth said.

To get a clear idea of what St. Baldrick’s is all about, you can look at the Honored Kids Table. It shows the photos and stories of Montana kids who faced cancer. White roses symbolizes lives lost to the disease.

Since the Montana City fundraiser began, it has raised more than $560,000 to help in the fight. Kluth said the strong support from a relatively small community has made an impression on the national St. Baldrick’s organization.

“When you can get that kind of numbers with that amount of people, that’s pretty amazing,” he said.

While the shaving is over, you can still donate to the cause. The Montana Firefighters and Friends are accepting contributions online here.