(EAST HELENA) Hundreds of people took to the streets of East Helena Saturday afternoon, walking to shine a light on the difficult subject of suicide in the community.

They took part in the third annual Out of the Darkness Campus Walk, one of hundreds of walks held across the country under the auspices of the American Foundation for Suicide Prevention, to raise money and awareness for suicide prevention efforts.

“It essentially is to bring suicide out of the darkness and into the light,” said Tova Reddick-Starkel, who organized the East Helena walk.

“Our mission today is to look to the future, to try to prevent suicide in people that we know and love that surround us every day,” said Whitmoyer. 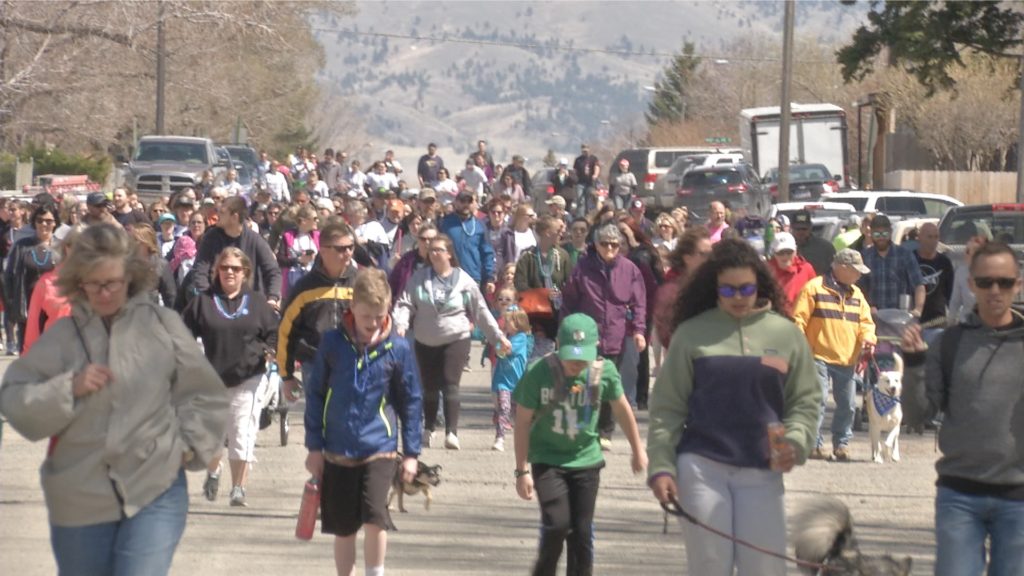 The participants walked more than a mile around the city – past Prickly Pear and Radley Elementary Schools and East Valley Middle School.

The East Helena walk started after the Helena and East Helena communities lost a number of young people to suicide over several years. Reddick-Starkel said organizers decided on a campus walk to bring the message of suicide prevention to youth.

When the event began, Reddick-Starkel said it was difficult to get people to talk about the issue, but she said the community eventually began to understand and embrace what it is trying to accomplish.

“We’ve had tremendous support from our community partners, great sponsorships, lots of volunteers – and our walkers, they’re amazing,” she said. “They come out every year; we have people returning every year.”

One of those returning walkers is Melissa Schaeffer, who has taken part each year. She walks in remembrance of her son, who died by suicide.

“It means a tremendous amount for the support of the community, people coming out, donating and really recognizing this as a situation that really needs to be addressed,” she said.

Schaeffer, who is also Reddick-Starkel’s aunt, said she wants people to know that suicide doesn’t always come with signs. She urged people to talk – and listen – to their loved ones.

“Talk to each other, pay attention to what people are saying, and love each other,” she said.

The money collected for the walk goes toward suicide prevention research, education and advocacy. Half of it remains in the local community. However, Reddick-Starkel said she doesn’t see fundraising as the most important aspect.

“The most important part is the participation,” she said.

She said one valuable effect is showing people affected by suicide that they are not alone. Most of the walkers wore strings of colored beads, with each color symbolizing how they have been impacted. White symbolizes the loss of a child, while red means the loss of a spouse and gold the loss of a parent.

In addition to the walk, organizers put together a resource fair at City Hall, highlighting some of the organizations that provide support services.

“I just want people to know that this is an event where you can come here and you can have hope, and you can heal from it,” Reddick-Starkel said.

If you or someone you know is having suicidal thoughts, please reach out for help.