The festivities started at 10 a.m., when Capital High students marched into Carroll College’s Nelson Stadium to the sound of “Pomp and Circumstance.” It was the school’s 45th annual commencement, honoring 282 graduates.

CHS principal Brett Zanto said graduates will face challenges as they go through their lives, but they’ve already overcome a lot as students. 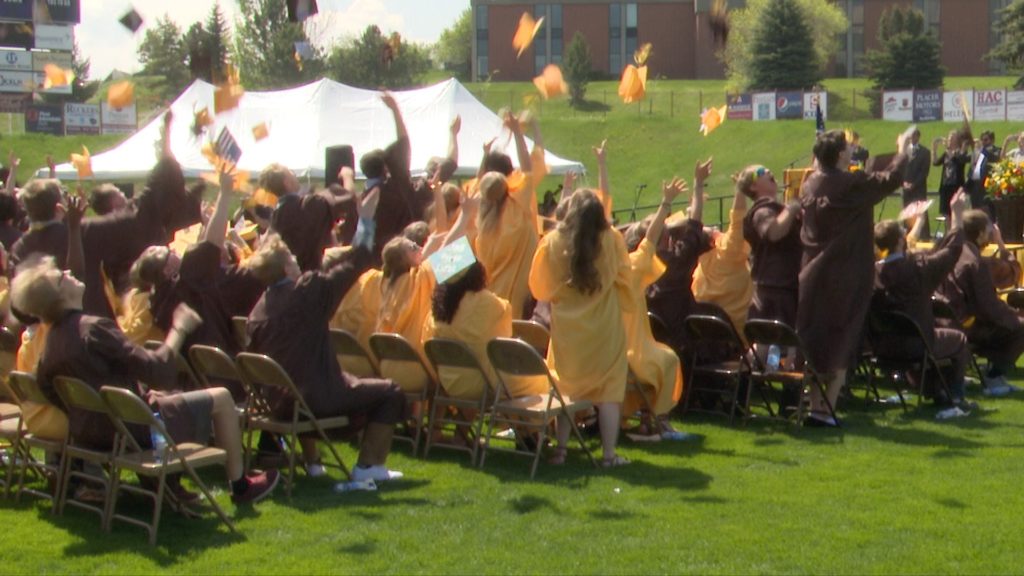 “As exemplified by the perseverance shown so far, they are well prepared for the obstacles that will come their way,” he said. “Seniors, no matter where you go after today, all of you share one common bond and that is Capital High School.”

Principal Steve Thennis said he’s been impressed by everything this graduating class has accomplished.

“Helena High boasts some of the absolute most amazing kids you’ll ever encounter, and they are far more talented than most of us that are sitting in the stands today,” he said. “I’ve been honored and blessed to grow up with you, and thank you for letting me join your ride.”

School district leaders made plans for possibly holding the ceremonies inside if there was heavy smoke or rain in Helena, but in the end, they were able to keep them outdoors. That meant plenty of room for thousands of proud friends and family members to watch the graduates.

One student with a particularly large cheering section was Helena High valedictorian Grady Koenig. More than a dozen people were in the stands to watch him graduate. Grandmother Cathy Johnston came from Boise, while great-aunt Sherry Lawson came in from Lynnwood, Washington.

“Do not let this beautiful sun go down on you today without thinking about everybody who has helped you to get to this place today,” he said.

“Sitting in those chairs was just surreal,” Coddington said. ”I felt like I should have been up in the bleachers once again this year, but it felt amazing to be able to turn my cap and throw it.”

Wherever they head next, the Class of 2019 says they will take a lot from their time at Helena High and Capital High.

“Definitely I take away my friendships and the relationships I’ve made with people,” Albertson said. “I’m definitely going to miss it. It was a great four years of my life.”