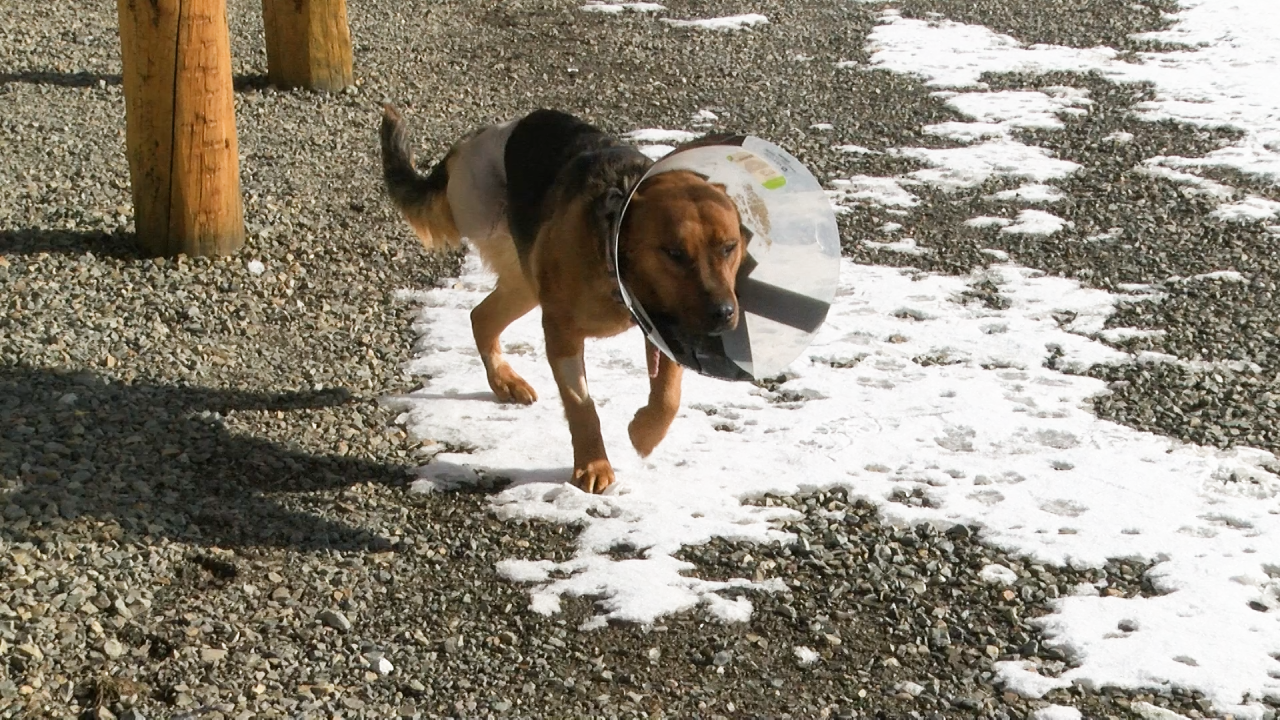 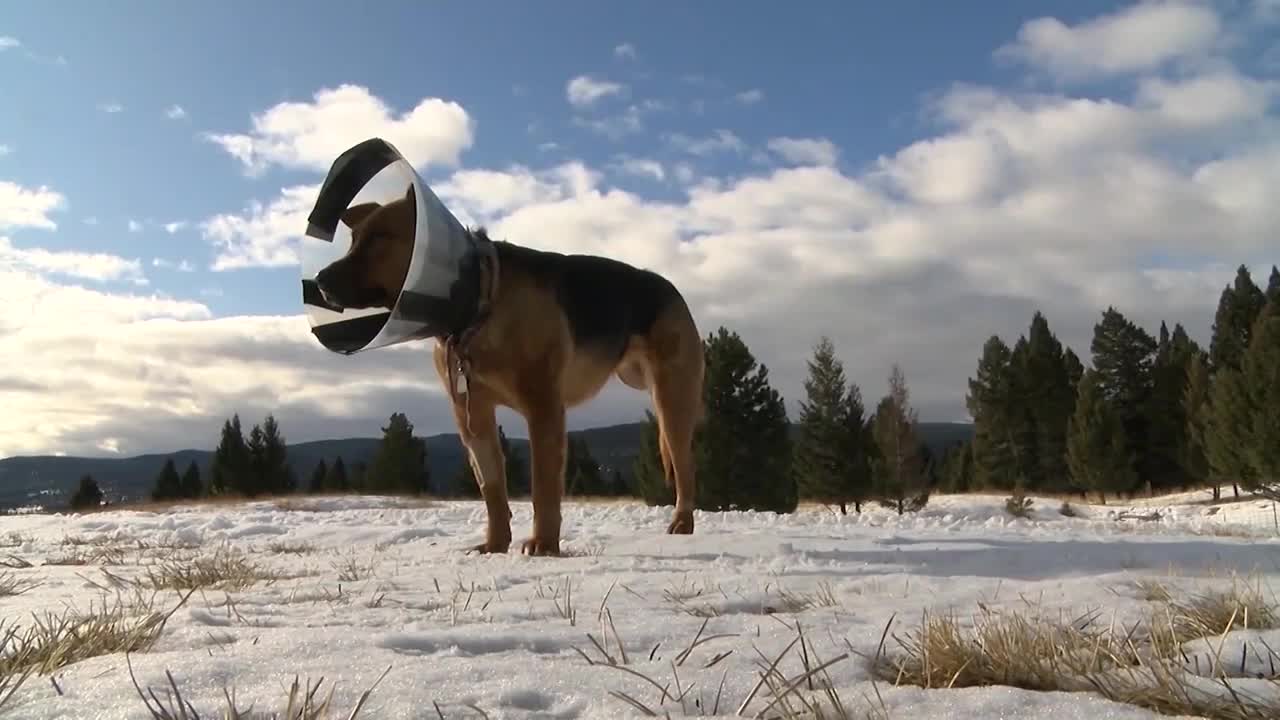 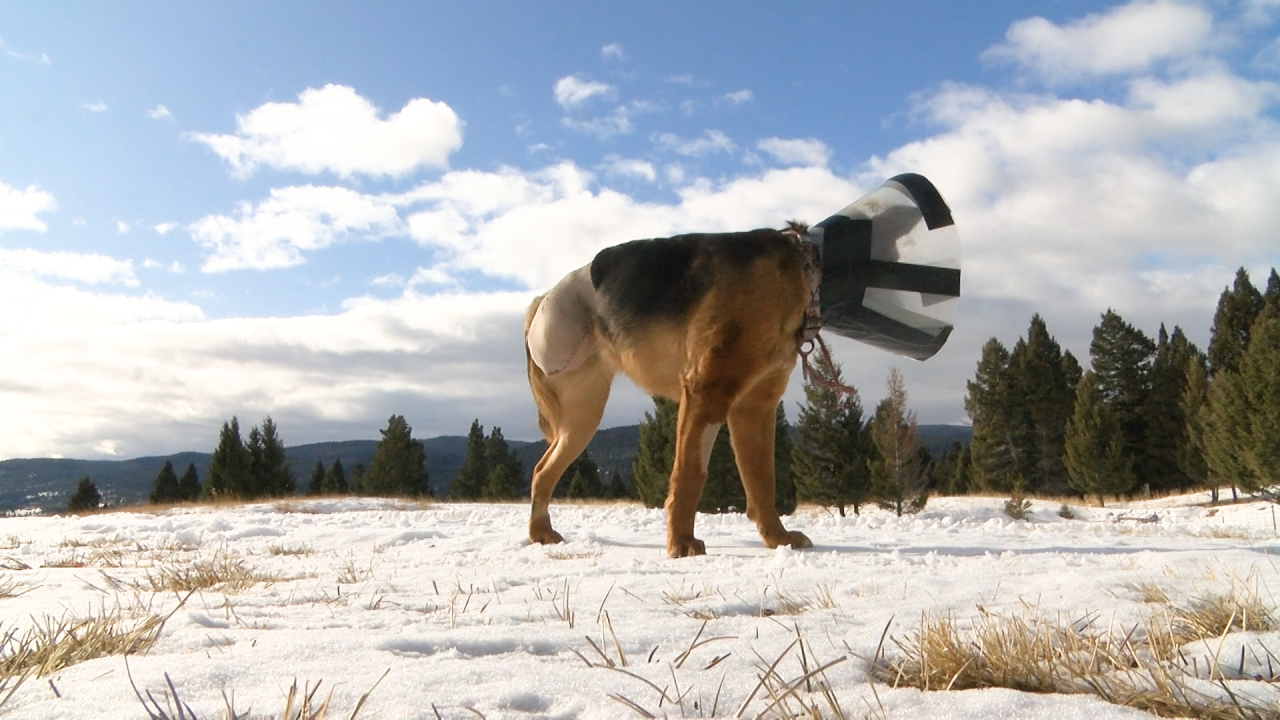 ELLISTON — An Elliston man is warning other pet owners to keep a close eye on their animals this winter after his dog lost a leg due to a suspected trap injury.

Army vetran Kelly Clark got his dog Stella from Pintler Pets Humane Society in Anaconda just a little over a year and a half ago to help with some emotional support.

“It has been a godsend,” said Clark. “I’ve owned dogs before, but for some reason I’ve never been this attached.”

Around New Year’s, Stella and the Clark's other two dogs got out of their property near Elliston.

Clark spent three days, on little sleep, looking for the animals. One of his biggest concerns were that they had encountered a predator or were struck by a vehicle. He said he never considered a trap.

“I have a PA on my snow plow so I was driving around in the dark calling their names, but nothing,” said Clark.”Then one day a little red pick up showed up and asked if I had three dogs and I said sure enough. He opened the door and the other two jumped right out, but Stella didn’t jump out.”

A hunter came across the dogs to the north of Elliston. When they found Stella, she was very weak and could barely walk. The other two animals wouldn’t leave her side.

Clark got Stella to a veterinarian as soon as possible.

Once the swelling went down, the vet noticed a clean cut that wrapped around the dog’s paw. She underwent two weeks of laser treatment to try and the leg, but after two weeks the skin began to sluff off and they had to amputate.

MTN showed several veterinarians pictures of Stella’s injury. Each one said they couldn’t be 100 percent sure of the cause, but the wound is very similar to what they see when an animal has been caught in a trap.

In Montana, trapping is strictly regulated. Montana law requires traps on public lands to be set back at least 50 feet from a road or trail, and 300 to 1,000 feet from a trailhead depending on the type of trap used.

Even with those regulations, pet deaths do occur, although infrequently. In 2019, MTN reported on a family in Missoula whose dog was caught in a trap and died as a result. That trap was illegally set in city limits.

Clark stressed he isn’t against trapping and doesn’t blame trappers for what happened.

“This is my fault that they got out, I’m absolutely 100% responsible for them,” said Clark. “And again, I can’t say it was a trap, but a lot of indicators are there. My concern is that somebody had to let her out because it’s pretty difficult to get out of a trap from what I understand. If that person would have called that ID number on her collar maybe we could have saved her leg.”

Stella’s recovery is looking well though, and she’s already beginning to outpace the other dogs, even being down a leg.

According to the Montana Fish, Wildlife and Parks (FWP) website, FWP recommends pet owners to keep their dog on a leash or otherwise always under their control when outdoors, and not let the dog wander off, especially out of sight.

If someone sees a dog or other domestic animal caught in a trap, they should call local law enforcement who can help get the animal home.

More information about trapping in Montana can be found here.