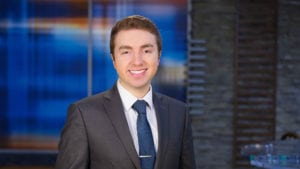 Portland native Jacob Fuhrer has worked as a reporter and anchor at KTVH since April of 2017. Jacob has known he wanted to be a reporter since he hosted “World News Tonight” in front of his parents’ camcorder in third grade. His passion for storytelling grew as he pursued a communications degree from the University of Portland. As an undergrad, Jacob wrote for the award-winning student newspaper, The Beacon, and interned at a small news station in Medford, Oregon where he got his first taste of real-world reporting. Jacob graduated in 2016 and moved to Big Sky Country to begin his career in journalism.

After spending a year reporting in the field, Jacob became the anchor for KTVH’s morning show, Daybreak. His work day starts at 3 a.m. when he comes in before the show to prepare. Jacob enjoys greeting the Helena and Great Falls-area viewers each morning alongside the morning meteorologist Katie Alexander.

Growing up in the Pacific Northwest, Jacob is no stranger to the outdoors. He frequently spent the weekends camping and skiing on Mount Hood with his family. Since moving to Montana, Jacob has enjoyed snow shoeing, hiking, and exploring our national parks.