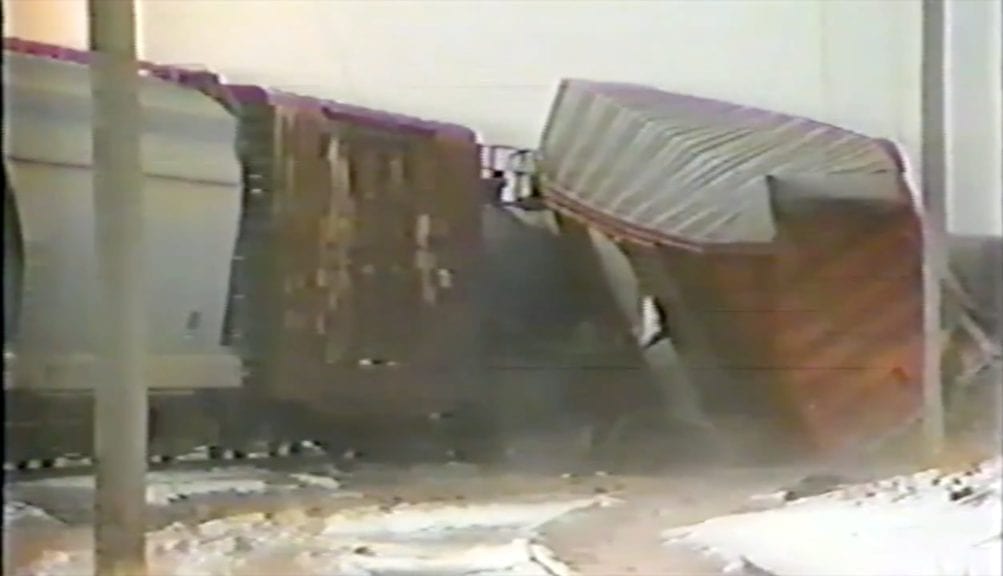 (HELENA) The enormous explosion the morning of Feb. 2, 1989, immediately got the attention of people across the Helena area. Local journalists were no exception.

“My wife and I woke from a sound sleep by this tremendous ‘Boom!’” said Ian Marquand, who was then news director and evening news anchor at KTVH.

“I just found myself thinking, ‘Wow, what was that? That was something big,’” said Mike Dennison, then a reporter for the Associated Press.

Reporters from television and radio stations, newspapers and news wires went out into temperatures more than 20 degrees below zero and wind chills close to 70 below. Over the rest of the day, they worked to get as much information as they could and keep the public informed about what was happening.

Dennison, now MTN’s chief political reporter, was one of the first to arrive at the scene of the disaster, before dawn.

“You could just tell right away, that was a major explosion,” he said.

He remembers walking out into the field where Carroll College’s Nelson Stadium now stands, and finding chunks of black metal that had been thrown by the blast.

“I’d been out here maybe five minutes, ten minutes tops, and just thought, ‘I’ve got to get out of here, I can’t be here, it’s just too cold,’” he said.

While Dennison returned to the AP office to get his information ready for the wires, television crews were gathering the first dramatic footage of the aftermath. Marquand and camera operator Jeff Hatley first arrived at the Benton Avenue railroad crossing, near where the runaway train cars had crashed.

“It was just as if a train had stopped at the crossing,” said Marquand. “The gates were down, the lights were on, the bells were ringing.”

He remembers it was difficult to see anything at first, because of vapor in the air.

Jay Kohn, a longtime news anchor with KTVQ in Billings, was MTN’s Capitol bureau chief in 1989. As he drove to the scene, he noticed the explosion had knocked out power to much of the city.

“There were no lights anywhere,” he said.

Authorities were giving Kohn a closer view of the crash site when a National Guard helicopter flew overhead.

“On their speaker, it was saying, ‘Vacate the area immediately,’” he said. “When the helicopter hovers over your head and tells you to vacate the area, there’s a pretty good chance that you’re going to do that.”

As the day went on, reporters scattered around Helena. They spoke to residents evacuated because of concerns over what was on the train, Carroll students whose dorms had suffered serious damage, and business owners surveying the effects on their operations.

Greg Pace was a producer and director at KTVH. He usually shot commercials, but spent Feb. 2 covering the news – getting footage of shattered windows and authorities trying to manage the situation.

“You go out and you see something like this, and something has happened to your town, and you just get this adrenaline rush,” he said. “It’s like, ‘Wow, this isn’t like going and shooting a commercial.’”

The bitter cold was always an obstacle.

“I have never been in temperatures that cold in my life,” Marquand said. “It actually became hard to talk. I was interviewing the police chief and the sheriff, and it was hard to form the words.”

At that time, TV reporters were using large video cameras that recorded onto three-quarter-inch tapes. The tape deck would be connected to the camera by a long cord.

“What I remember is that umbilical cord became a hard pretzel in about 10 seconds,” said Kohn. “I could only shoot about 30 seconds at a time, because the battery would die.”

“Just getting tired carrying that, you tended to not always think about your frozen fingers and toes,” Pace said.

While journalists were covering the story, in many cases their own families were being affected. Pace and Kohn said their homes, more than a mile away, had cracks in their windows and walls. Power was out to Dennison’s home for hours.

When Marquand returned to KTVH’s studios – then in a Quonset hut on North Montana Avenue – he found the power outage had left the station without heat. He remembers having to wear his winter gear indoors for much of the morning.

With KTVH’s power out, the station’s transmitter got so cold, it went off the air. Eventually they were able to get enough power to put out an audio signal.

“As soon as that happened, we tried to gather up as much written information as we could, I went in the studio, and I basically did a radio newscast on the TV air,” said Marquand.

Throughout the day, reporters expected to hear news of deaths or major injuries. But to their amazement, no one was seriously hurt.

“Whenever people recall it, I think they do so with kind of a smile of wonder or amazement on their faces, just going, ‘God, we just can’t believe how this happened,’” Dennison said.

By that evening, KTVH was back on cable, though its broadcast signal remained off. Marquand and Pace remember there were changes being made to the newscast up to the final minutes before they went on the air.

“It was exciting knowing that this was kind of history,” said Pace.

The day after the explosion, journalists were invited back to see what was left at the scene. The wreckage of the train cars was covered in snow and ice, because of all the water that had been sprayed to put out the fire.

The cold caused one final complication that day, as KTVH’s tape deck malfunctioned and they weren’t able to use any footage of that scene.

Amid all the hard news of those days, reporters also remember covering stories of the Helena community coming together, and neighbors helping neighbors.

“Helena takes care of its own; they really do,” Pace said. “This is a place that you care for each other, and that’s what happened here.”

For those who covered the disaster, even 30 years later, it’s something they can’t forget.

“Honestly, I still get chills when I look at the footage of what happened and how big it was,” said Pace.

Marquand said he often rides his bike along the railroad tracks in the summertime.

“Occasionally as a train goes by, I’ll remember that day in early February, 1989,” he said.