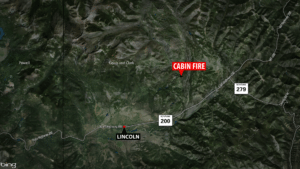 According to Lincoln Volunteer Fire Chief Zach Muse a caller reported seeing a smoke in the Lander’s Fork area around 6:45 a.m. Monday morning.

Muse says the fire was initially believed to be a wildfire so the Montana Department of Natural Resources and Conservation (DNRC) was called to respond. When DNRC arrived at the fire’s location near the intersection of Copper Creek Rd. and Sucker Creek Rd. the found a cabin on state lease land full engulfed.

Lincoln Volunteer Fire was then dispatched to take over the incident.

Chief Muse says crews had to initially keep their distance from the fire due to explosions from several small propane tanks. He added that favorable weather conditions, including humidity, help keep the flaming debris from sparking a larger wildfire.

No one was injured in the fire, the cause remains under investigation.