Montana DEQ highlights cleanup at Mike Horse Mine near Lincoln 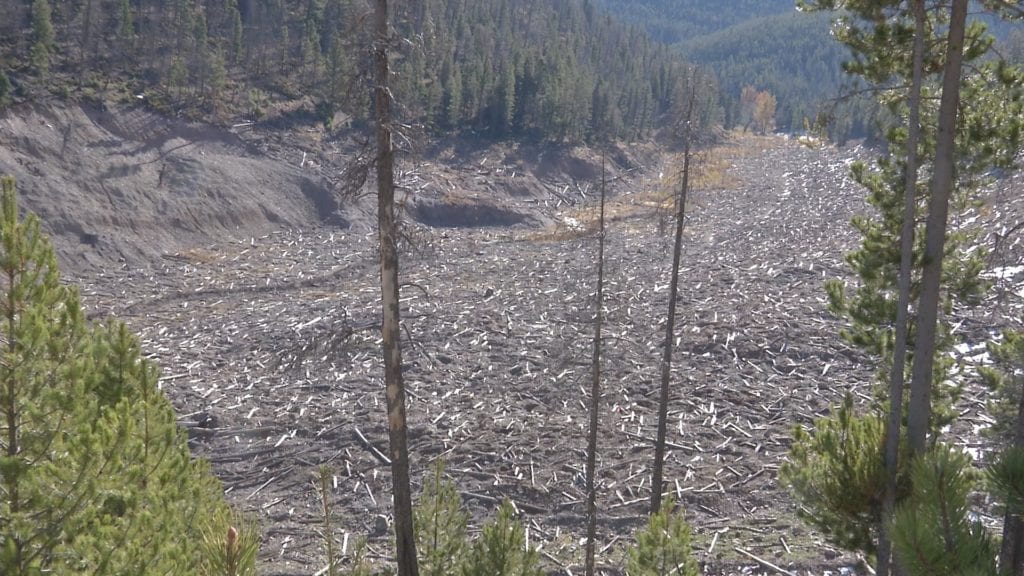 (LINCOLN) On Saturday, about 20 people came to the headwaters of the Blackfoot River, to get a look at the work that’s been done over the last five years to clean up mine waste in the area.

The Montana Department of Environmental Quality has held a number of public tours to show the progress of remediation work in the Upper Blackfoot Mining Complex, northeast of Lincoln.

DEQ project manager David Bowers led Saturday’s tour. He has worked on the project for 16 years, and he says the changes he’s seen in that time have been dramatic.

“The lay of the land has changed tremendously,” he said. “The streams, the floodplains that have been reconstructed are so different than what was up there before.”

The Upper Blackfoot Mining Complex includes a number of inactive mines – most notably the Mike Horse Mine, which produced lead and zinc. The mine was especially active around World War II, when demand for those metals was high.

In 1941, a dam was built across Beartrap Creek, as a way to contain the mine’s tailings. Then, in 1975, the dam partially failed after heavy rain, causing the contaminated materials to spread.

In 2008, the state of Montana and the U.S. Forest Service reached a $39 million settlement with ARCO and ASARCO over the environmental damages in the Mike Horse area. Since 2014, contractors have been actively working to clean up the mine waste in the area. They have taken out the dam and removed more than 800,000 cubic yards of contaminated soil. Now, they are working on restoring the stream beds they had to excavate.

“Really what we’re looking at is a restoration effort to recreate the fisheries up there,” Bowers said.

After the contaminated soil has been removed, crews replace it with clean fill dirt. Contractors then build new courses for the streams.

In many places, plant life is growing again in areas that had been barren. Bowers said they put down duff, plant matter from the nearby forest floor, to encourage natural vegetation growth.

“Not only is it native to Montana, but elevation-wise, climate-wise, these plants are matched to what’s up there,” he said.

The goal is to get the ecosystem to a point where it can develop back into a natural state.

“Their construction gives everything kind of a jump start or a head start, and then things kind of naturally take over after ten or 15 years,” said Bowers.

The contaminated material removed from the Mike Horse area is taken to a repository, built in 2013 just off state Highway 279. Once all the mine waste is in place, a permanent cap will be built over the repository, to keep water from leaching into those materials.

Leaders estimate there will be a total of 1 million cubic yards of contamination removed from the Upper Blackfoot Complex. Bowers said the last waste should be removed early next year. He expects the stream construction work to be finished several months after that, and the repository to be capped in 2020.

Bowers said it has taken a lot of cooperation to make this project happen.

“From my position, it’s absolutely fascinating,” he said. “There’s people from all kinds of disciplines: plant specialists, stream construction specialists, geochemists, engineers. The list goes on and on of the different perspectives that are brought to this job to make the end product be something that we can be proud of.”

Saturday’s public tour was the last DEQ will offer this year, but agency leaders say they will have more starting next spring.