HELENA – Montana election officials are warning voters about inaccuracies in an absentee ballot mailer that was sent to Montanans last week.

The mailer from the Republican National Committee (RNC) incorrectly stated that absentee ballots could be postmarked in Montana and still be counted if received after election day.

In Montana, all ballots must be received by 8 p.m. Mountain Time on Election Day, Tuesday November 6.

Election officials caution that any ballot received after that deadline will be considered late and not counted in the election.

In a statement released on Wednesday October 24, the RNC apologized for the error, and say steps are being taken to rectify the situation.

“We regret the unintentional error we made in a recent mailing. We are contacting all voters who received the mailing through live phone calls starting today and we are sending new mailers to each voter providing clarification.” – RNC Spokesperson Miki Carver

The Office of the Montana Commissioner of Political Practices have spoken with the RNC about the mailer and appreciate the steps being taken to correct such errors.

The Lewis and Clark County Elections Office recommends people mail their absentee ballot at least a week before Election Day to ensure it arrives on time.

Elections Supervisor Audrey McCue also wants people to know that there are options if they are worried their ballot won’t make it in time.

The Lewis and Clark County Elections Office have already processed about 9,000 absentee ballots of the 27,200 they sent out earlier this month.

McCue added her office has been getting calls about absentee ballot mailing costs and would like to let voters know one Forever stamp (50 cents) is enough to cover postage of the ballot. 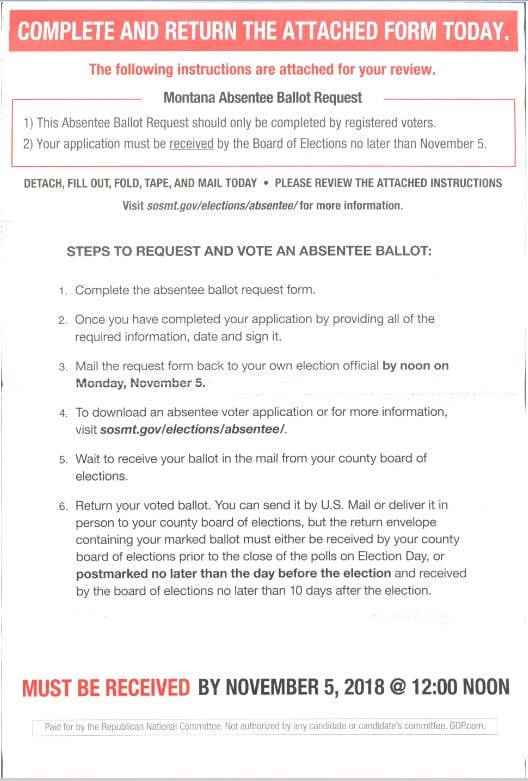