The US Geological Survey has issued a new threat ranking for volcanoes in the United States.

The Yellowstone Caldera is ranked pretty far down the list, at 21st. That’s in the high danger category, which is the second highest ranking on the list. It has a threat score of 115.

That’s a far cry from the threat score of 263 for Kilauea, which is at the top of the list.

Next is Mount Saint Helens with a threat score of 235, followed by Mount Rainier with a 203 threat score. Both are in Washington.

Fourth is the Redoubt Volcano in Alaska, which has a threat score of 201.

Fifth is Mount Shasta in California with a 178 threat score.

These updated threat scores factor in some new elements, such as threats to aviation and experience with damage caused by volcanoes since 2005. Population changes in the last decade have also contributed to the threat reassessment.

The threats are also based on the type of volcano, its history, and a lot of factors that can change pretty quickly, such as the number of people living near a volcano, tourism in areas near volcanos and the growth of urban areas that could be affected.

That’s why volcanoes in the continental United States are generally ranked higher than in the past.

Eleven of the 18 very high threat volcanoes are in Washington, Oregon, and California.

Currently, no volcano in the continental United States has any sort of activity alert. 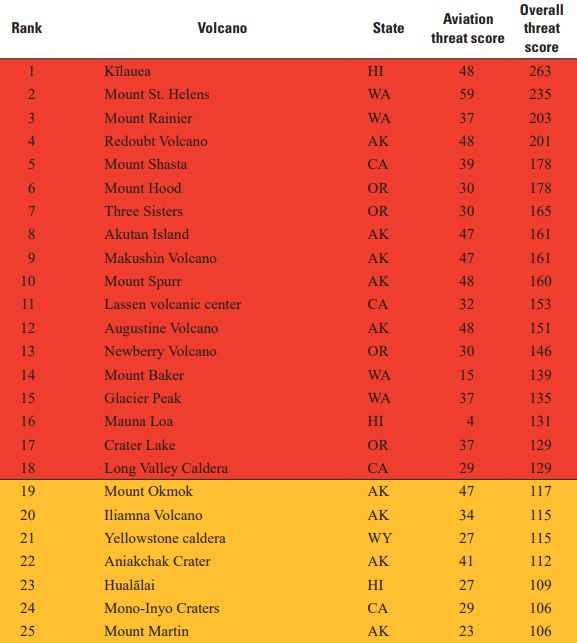