Teens arrested in connection with two deaths near Browning

Amy Sue Whitegrass, 28, and Lindsay Whiteman, 38, have been identified as the victims of an incident that occurred in the Star School area west of Browning.

The GCSO, Blackfeet Law Enforcement Services, and the FBI are investigating. 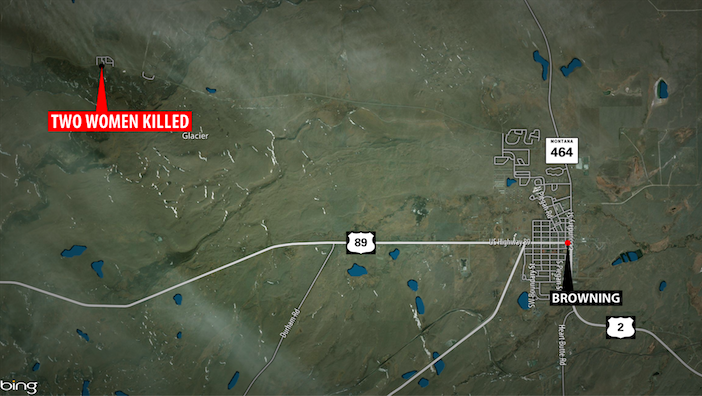 (1st Report, 1:27 p.m.) Two 17-year-old males are being held on charges of tampering with evidence in connection with the shooting death of a woman and a fatal hit-and-run near Browning.

According to an affidavit, a Great Falls Police officer located a maroon Nissan truck in the 800 block of 19th Street South that was of interest in the death of a Browning woman who was struck by a vehicle on Star School Road on Tuesday.

The officer observed two males approach the vehicle. The males were detained and an officer found a pistol in the waistband of one male’s pants as well as substances later identified as marijuana and hashish on him, according to the affidavit.

The teenagers were then transported to the Great Falls Police Department for questioning.

The affidavit states one male agreed to speak with investigators and told them the males were inside the truck with two women in the early morning of October 30 near Browning.

After the shooting, the male being questioned said the male who shot the woman got out of the vehicle with the second woman, who confronted him about what had just happened, according to the affidavit.

The male being questioned told investigators the other male then got back into the truck to flee the scene and the second woman stood in front of the truck to try and stop it from leaving.

The male being questioned said the other male then ran the woman over with the truck. The two males eventually pulled off the road and moved the woman who was shot and now deceased into the rear seat of the truck, according to the affidavit.

The two teenagers then drove to Great Falls with the woman’s body in the backseat, according to the affidavit.

The affidavit states the lettering on the truck was scraped off of the windshield in an attempt to disguise the vehicle.

The two teenage males face charges for tampering with physical evidence. Additional charges are expected to be filed.

The judge agreed and set their bonds at $150,000. The case is being investigated by the FBI.

NOTE: It is KRTV’s policy to not report the names of juvenile individuals involved in court proceedings until they are charged with a violent crime.

Previous:
Pedestrian hit and killed by vehicle near Browning