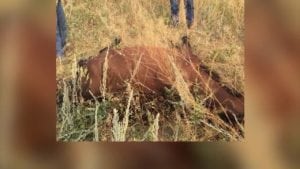 WOLF POINT-Richard Dean Holen has been charged in connection with the deaths of more than a dozen horses in Roosevelt County.

According to court documents, a veterinarian that inspected the carcasses said: “The horses all appeared to be in various states of decay indicating mortality has been occurring over a period of time. The foals appeared to have died first and were in advance state of decay being mostly skeletal remains with few maggots and pupa. Given the life cycle of maggots, death may have occurred ranging from 5 to 20 days.”

The veterinarian went on to state that “evidence suggests dehydration to be the leading cause of death.”

Holen is scheduled to appear in District Court on November 14, according to a Facebook post from Fort Peck Tribal Councilman Jestin Dupree.