BILLINGS- More thefts reported at a Billings West End apartment complex have prompted further outcry from tenants, who are urging property management to better secure buildings where they live.

In October, an employee of the Happy Homes apartment complex on Shiloh Road and King Avenue was caught on home video allegedly stealing prescription medication from an apartment after using a master key to gain entry.

The suspect in the case has not officially been charged.

Now, the family who captured video of the theft has been hit with more theft, this time from someone breaking into their garage and stealing valuable items from a vehicle.

The second theft happened earlier this week. And when it did, resident Rayanne Crick said she’d had enough.

Crick said her husband, Gary, went through cancer surgery in February, and both his pelvis and leg had to be amputated.

As the family began the process of selling their home, Crick says they moved into the Happy Homes complex because it is disability-accessible.

“In mid-September, we had work done in the bathroom,” said Crick.

At that time, the property manager and a maintenance worker came into the property to work on the bathroom. Crick said the following week, Gary’s medicines went missing.

“We were trying to figure out how this could be, because he was very religious about taking his medication. He was very regimented in his routine,” she said.

When pill after pill went missing and Gary couldn’t get more, the Cricks decided to install cameras.

“He had to wait to get more medicine. This is stuff he has to take to combat phantom pain. He has to take in order to live day to day relatively painless,” said Crick.

The family installed the cameras on a Sunday. Crick said the following Tuesday, they caught an employee using a master key to enter their apartment and take the pills. 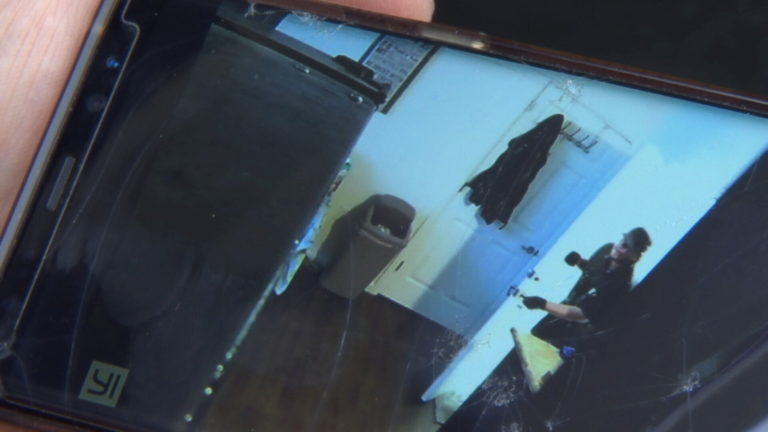 Fast forward to this week. Crick said their garage was broken into, with belongings thrown about and items from Gary’s truck taken. The family did not place cameras on their garage, which sits adjacent to their apartment.

Representatives with Happy Homes say they are on top of the thefts and trying to step up security.

On Wednesday morning, deadlocks were placed on the Crick’s garage door, something General Manager Jim Frisk said they are installing on every apartment.

He says they have so far installed 48 deadlocks on doors.

“So we will get about 24 a day done and we are increasing our manpower to do that,” said Frisk.

Frisk also said the owner of the property has decided to place security guards on the property and hopefully install entrance locks on the front doors of each apartment complex building.

As for the maintenance worker who allegedly stole a master key and gained access to the Crick’s apartment, Frisk said he was immediately terminated.

Background checks and drug testing is required for a worker hired at the Happy Homes complex, according to Frisk.

That particular employee had been with Happy Homes for over a year.

Until now, each maintenance worker carried a set of master keys with them each day and at the end of their shift, the keys were then hung up and locked away, Frisk said.

“We have changed it so the person who has master keys is on-call for an emergency,” said Frisk. He said there are four on-call workers.

But all of those changes are not enough for the Crick family to feel safe. Rayanne said as a community, more needs to be done.

“We feel that Billings is a community worth fighting for. My husband has been here almost his entire life and we are raising our kids here, and it has to be a collaborative effort in order for us to cut down on the theft that is going on in this complex,” she said.

She has since made a Facebook page where Happy Homes residents can share stories and safety messages with each other and keep one another current of odd things happening in the complex.