LAUREL- A Laurel man is taking a chance on an old historic and vacant downtown building: the old Laurel Trading Post on West Main Street.

Ron Seder hopes to restore the 112-year-old building to its original glory. On Friday, he opened the doors to the vacant structure to show the progress so far.

It’s not going to be easy because the foundation and walls are unstable, something Seder is currently working on.

Seder said he couldn’t imagine the building being torn down, so when it went on the market, he jumped at the chance to take on the project.

“It was a really good deal. Deal of the century,” said Seder.

He opened a laundromat in August, in the former King Koin space adjoined to the Laurel Trading Post. A salon will be the next business to also occupy that space.

As for the trading post, Seder wants to fix it up and rent it out. He said there’s already interest from a yoga studio. He also plans to add four 700-square-foot apartments on the back of the trading post.

Historic charm drapes the structure even in its remodel phase. A decorated tin ceiling and signs painted on brick from previous businesses are now exposed after Seder removed an exterior wall.

It’s those finds that get him excited.

“I’ve got pictures of the old timers standing out in front of the building, back when the streets were mud,” said Seder.

Back in the early 1900s, customers would come to the Laurel Trading Post to buy guns and ammo, hardware 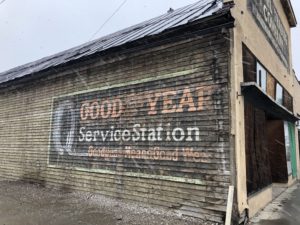 and canned food. The Laurel Trading Post was built in 1906, two years before Laurel officially became a city.

However, for at least the last 40 years, it has sat vacant. It has a storied past, according to Seder.

“I’ve lived in Laurel for about 40 years, and I’ve never seen the doors open. It was an antique junk store and they had the whole thing filled with stuff at one time, and they said he just one day walked out the door and never came back,” he said.

He says the building should be done sometime before February.