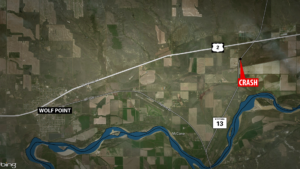 Two people died in a crash in Roosevelt County on Wednesday when a pickup truck reportedly got stuck on train tracks and an oncoming train crashed into the truck.

The portion of tracks the pickup got stuck on is located off of a rural dirt road.

The names of the victims have not yet been released.

The first crash happened just before 5:30 a.m. on Montana Highway 13 east of Wolf Point. No other details are known about this crash at this time.

The second crash happened near Whitehall around 7:00 a.m. at the intersection of Highway 2 and Highway 41.

MHP says a woman died in that single vehicle crash.