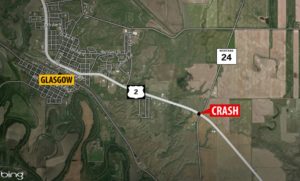 The MHP says that a sedan was heading toward Glasgow when the driver made a sudden U-turn in the middle of the road for some reason. The sedan turned in front of a pickup truck.

The driver of the truck braked, but the MHP said the crash couldn’t be avoided, and the truck smashed into the driver’s side of the sedan.

The driver and passenger in the pickup truck were taken to the hospital for treatment of their injuries, which are not life-threatening.

The MHP says that everyone involved in the crash was wearing a seatbelt. There are no indications of alcohol or impaired driving at this point.

The names of the two people who died have not yet been released.

(1st Report, 12:45 p.m.) The Montana Highway Patrol reports that at least one person has died in a car crash in Valley County.

It happened along US Highway 2 near the intersection with MT Highway 24, just southeast of Glasgow.

The MHP has not yet released any other details about the incident and is continuing to investigate.