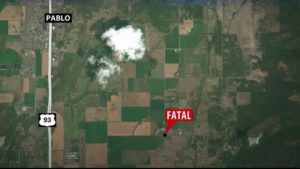 POLSON – Authorities have released the name of the teenager who died in a weekend crash in the Mission Valley.

“The Sheriff’s Office sends our condolences to the family of Aliyah,” Sheriff Bell stated in a news release.

Authorities say all of the people involved in the 2:15 a.m. wreck that happened on North Foothills Road near North Crow Road were under the age of 17 years old.

The Montana Highway Patrol MHP reports the driver lost control causing the vehicle to enter the ditch and roll over several times.

MHP is continuing to investigate the crash. However, authorities previously told MTN News that alcohol and speed are believed to have played a role in the accident.