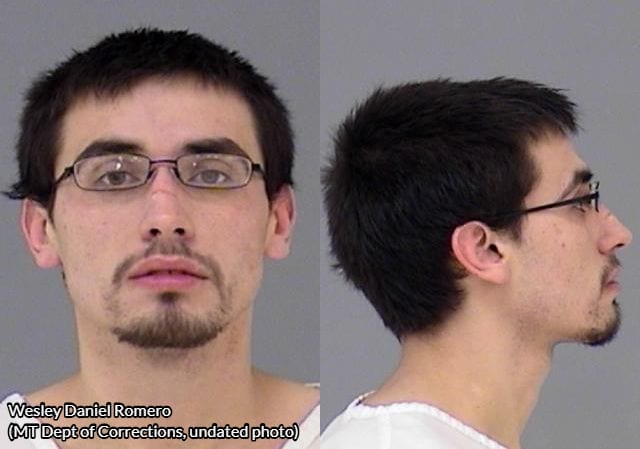 GREAT FALLS – Wesley Daniel Romero is facing several criminal charges after he reportedly led police on a high-speed chase in a stolen vehicle on Tuesday.

Court documents state that police saw Romero driving a red Ford Explorer that had been reported stolen. A police officer pulled the SUV over and ordered Romero to get out, but Romero reportedly refused, asking “What did I do?” Romero then drove away, leading the officer on a chase that reached speeds of up to 60 miles per hour in a 30 mph zone.

According to the court documents, Romero ran traffic lights and nearly hit several vehicles. Eventually, officers found the vehicle along the 1100 block of 4th Alley North.

Romero was soon found hiding in a dog house in the backyard of a nearby house; he reportedly tried to run away, but was quickly captured and taken into custody; court documents note that police had to use “significant force” to handcuff Romero, as he was “flailing and pulling away.”

Romero reportedly told medical staff at Benefis hospital that he was “being dumb and ran from them,” and “I didn’t put my hands up when I should have.”

He later told police that he had received the SUV from a man he had just met, but he did not know the man’s name, what he looked like, or why he gave him the vehicle.

Prosecutors requested that bond for Romero be set at $20,000.

Court documents and a police affidavit note that Romero has two theft convictions and several misdemeanor convictions, and there were two arrest warrants for him at the time of the incident.