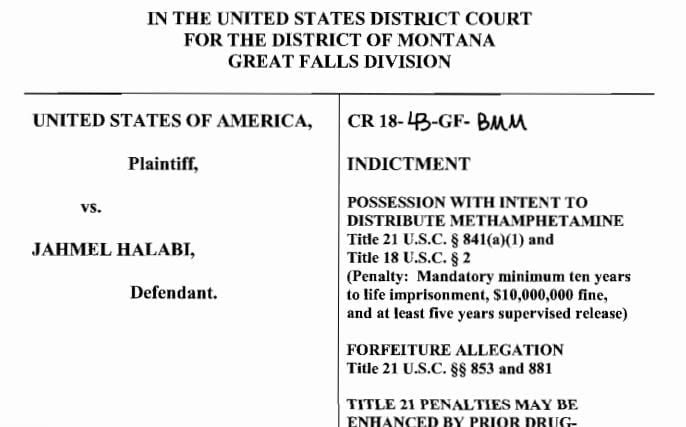 Halabi, 43, pleaded guilty to the charge in August.

On April 14, 2018 near Lewistown, a Montana Highway Patrol trooper stopped a car in which Halabi was a passenger. The trooper arrested Halabi on an outstanding warrant and took her to jail. Additional information that Halabi and the driver were involved in drug activity led to officers getting a search warrant for the car.

A search turned up about 99 grams, or 3.5 ounces, of actual meth and baggies that were hidden in the dome light.

That same day, the Fergus County Sheriff’s Office reviewed jail calls and identified Halabi as having called a person and requesting he “get the stuff out of the car” and “the stuff out of the house.” Halabi also indicated that drugs were located in a safe in the residence and provided the safe’s combination in the jail call.

Lewistown police officers got a search warrant for Halabi’s residence and seized about 14 ounces of actual meth, $4,000 cash, and drug paraphernalia.

During an interview with law enforcement, Halabi admitted to dealing meth and said officers had missed meth and firearms during the search of her home.

Officers returned to the residence and seized about 31 ounces, or 1.95 pounds of actual meth, which is the equivalent of about 7,072 individual doses. Also seized were various rounds of ammunition and bank receipts.