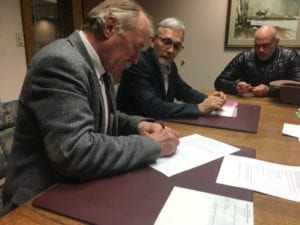 GALLATIN COUNTY – The Gallatin County Commission reports it has finalized a land swap with the state of Montana that gives the county ownership of the land occupied by the Logan Landfill.

In a media release, the county said the deal, more than ten years in the making, will also increase local and visitor access to public lands.

Gallatin County Commission Chair Steve White signed off on the exchange Tuesday, finalizing the deal between the county and the Montana Department of Natural Resources and Conservation.

White was joined by Jim Simon, district manager of Gallatin Solid Waste Management District, and Mike Atwood and Craig Campbell of the DNRC to sign the paperwork at Security Title Company in Bozeman.

Included in the state land were 80 acres for permanent landfill easement and 8.81 acres of commercial lease for the landfill’s scale house facility. The county’s land was about half agricultural land and half grazing land.

The Montana Board of Land Commissioners gave final approval for the exchange in October.

The county’s land, which abutted the western edge of the Logan Landfill, was purchased in 2009 with plans to eventually buy the rest of the land. Gallatin County has been renting a portion of the landfill from the state.

Now, rather than leasing state land, this critical exchange will put the Logan Landfill on county-owned ground and provide for future growth of the county’s landfill for decades to come.

And importantly, the exchange will also improve access to public lands, creating a contiguous and publicly accessible block of four sections of state-owned land in Gallatin County.

At a public hearing late last month, the commissioners praised Chairman White for his work on this project over the years.

“This may be one of his crowning moments,” said Commissioner Joe Skinner.

Commissioner Don Seifert said the move “brings a lot of certainty to the whole county.”

“Thanks to you, commissioner, for sticking with it,” he said.

White thanked his partners at the DNRC, the Gallatin Solid Waste Management District and the Gallatin County Attorney’s Office.

The total cost of project for Gallatin County, which includes purchasing and improving the land, was $1.8 million. It was paid for with landfill operation funds and not taxpayer dollars. White noted that tipping fees at Logan Landfill have not been raised in more than 12 years.

And it will be business as usual in Logan as the exchange will not impact day-to-day operations at the Landfill.