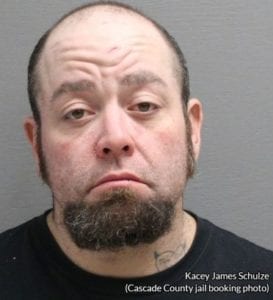 GREAT FALLS – Kacey James Schulze has been charged with felony burglary and several misdemeanors after he allegedly broke into Jakers restaurant.

Court documents state that police officers responded to a commercial burglary alarm at Jakers on 10th Avenue South at about 5:25 a.m. on December 25th.

Officers saw Schultze running away from the restaurant; they followed him and found him in a backyard on the 1500 block of 9th Avenue South, where he was arrested.

Court documents say that when he was interviewed by police, Schulze admitted using meth recently, going to Jakers with Decaccia, and forcing entry into the restaurant.

According to the police affidavit, Schulze told officers that he and Decaccia used a large metal bar to shatter a door to get inside. The affidavit states: “Decaccia carried a bucket full of tools into the building. Decaccia used these tools (grinder, torch, pry bar, etc.) to attempt to gain access to the safe.”

Schulze denied having any knowlege of Decaccia’s intentions were until he focused on the safe.

After a few minutes, Schulze saw police lights outside, notified Decaccia, and then ran away.