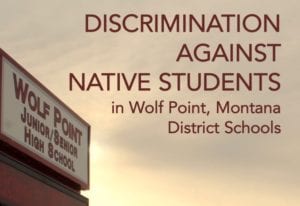 (BILLINGS) The U.S. Department of Education Office of Civil Rights will investigate claims that the Wolf Point School District discriminates against and mistreats Native American students in violation of federal civil rights laws.

According to a news release, the investigation comes 1.5 years after advocates filed a 46-page complaint (PDF) to the DOE on behalf of the Fort Peck Assiniboine and Sioux Tribes.

The complaint included dozens of accounts by Native American students who describe harassment by school officials and data charting trends of disparate treatment.

The DOE’s announcement was made shortly after The New York Times published a report that revealed Wolf Point schools have neglected Native American students and failed to deal sensitively with the devastating trend of suicides among local Native American youth.

“Education should be a source of hope and opportunity,” said Roxanne Gourneau, a Wolf Point parent, grandparent, and tribal member. “Yet instead of providing a safe learning environment, the Wolf Point School District adds to the long history of educational abuses of our tribal communities. My son Dalton was a victim of this abuse. In the midst of a local Native youth suicide crisis, in the middle of a school day, they kicked him off the wrestling team and, without trying to contact me, cast him out in tears into a blizzard. Dalton went home and took his own life. No parent should endure the pain of losing a child, yet it is too common here. The school district has done more to fuel Native students’ trauma than to support their education. Change is long overdue. I am hopeful that this investigation by the DOE may finally bring that change.”

A press release states the allegations now under federal investigation amount to violations of several civil rights laws and fall within the DOE’s enforcement authority. Under Title VI of the Civil Rights Act of 1964, the agency has a duty to ensure schools receiving federal financial assistance do not violate prohibitions on discrimination and retaliation based on race, color, and national origin. Under Section 504 of the Rehabilitation Act of 1973 and Title II of the Americans with Disabilities Act of 1990, the agency enforces similar protections for students with disabilities.

“We are hopeful about the DOE’s decision to investigate the profound, persistent, and unlawful discrimination and mistreatment inflicted on Native student in Wolf Point schools,” said New York University (NYU) School of Law Acting Assistant Professor Melina Healey, who filed the Tribes’ complaint along with the NYU School of Law Racial Justice Clinic. “Tribal children have suffered unfairly for years in the Wolf Point School District. We trust that the DOE will fulfill its duty to enforce the law and protect these students’ rights by completing a swift and thorough investigation that leads to much-needed reforms, and we will monitor and support the process. We salute the courage of the victims of discrimination who have come forward to share their experiences and hope that, under the protection of the federal investigation, others may now feel safe in sharing their own stories of mistreatment in the Wolf Point schools.”

The federal investigation could have a variety of outcomes, including facilitated resolution between the school district and Native families or a written agreement identifying the actions the district will take to comply with anti-discrimination laws. If unlawful discrimination is uncovered and school officials do not agree to remedial efforts, the DOE may initiate administrative proceedings against the school district or refer claims to the U.S. Department of Justice (DOJ) for further investigation and potential litigation.