Firefighters around Great Falls raise funds for leukemia and lymphoma 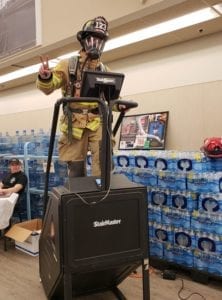 GREAT FALLS– It’s not every day you see a firefighter climbing stairs in the middle of a grocery store.

But for Montana Air National Guard Firefighter Doug Ulsh, they are fundraising for a great cause.

“March 10th of this year, we are going to go over to Seattle and climb 69 flights of stairs for leukemia,” Ulsh said.

He, along with firefighters from Great Falls Fire Rescue, will be participating in the 28th Annual LLS Firefighter Stairclimb.

This is the world’s largest on-air stair climb competition, and they raise funds for the The Leukemia & Lymphoma Society.

This will be the second year that Ulsh will be participating in the climb.

“I had a lot of things going on with my life, I broke my neck and I went through a lot of other adversities. Also, my father-in-law died of leukemia, so that is a big part of why I wanted to do it,” Ulsh said.

Not only will he be honoring his father-in-law— Great Falls Police Officer Dan Loomis— but he will also be honoring two young children who are battling leukemia.

“Kelvin has gone through his chemotherapy treatments and is recovering now. Brook is just now going through her treatments,” Ulsh said.

Ulsh, along with 2,000 firefighters from across the United States and around the world, will climb 1,356 steps wearing all of their firefighting gear.

“Full turn out gear which is about 60 pounds. I am going to try to make it all the way to the top with one air bottle,” Ulsh said.

Ulsh is hoping to beat his time of 29 minutes, by completing the climb in 20 minutes this year.

All the money raised for the Firefighter Stairclimb will go towards the Leukemia & Lymphoma Society.

The Great Falls Firefighters will be raising funds for their climb tonight at the Hi-Ho Traven.