BILLINGS- Meth is often referred to by law enforcement and addicts as the devil’s drug.

Montana law enforcement with years of experience and training in the drug trade have seen people get into selling drugs because they need the money.

But for many, the addiction just simply takes hold.

“Some people enjoy how it makes them feel,” said Lt Brandon Wooley with the Billings Police Department. “And they will tell you that meth is the devil’s drug and it’s taken everything from them.” 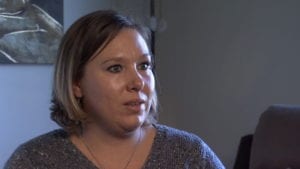 Billings resident Mandy Nunes got into drugs because it was something to do when she was a young girl, living in a small Montana town.

“It started with drinking and smoking weed when I was about 13,” said Nunes.

Born in Columbus, Nunes moved away from Montana when she was young, only to come back to eastern Montana.

“For me, it started the way it starts for a lot of people,” she said. “I was living in Glendive. There wasn’t a lot to do there at that point in time.”

She started with drinking and smoking weed, which she says she thought was pretty normal.

“That is what I grew up seeing,” said Nunes. “My mom is recovering herself.”

She says she grew up in a house where there was drug use, and alcohol use was pretty normal. The majority of the people she knew, her friends and family also used.

“I just thought that was what everybody did,” he said.

But things changed for her by the time she turned 14 and moved to Billings. That’s when Nunes tried meth for the first time.

“So I was 14 when I did my first line, and it was not an addicted thing back then. I didn’t need it,” she said. “I remember being so messed up that it scared me, but then I lived through it and was fine the next day, and then that became, the feeling that you are trying to get.”

By the time she turned 20, she said it became an addiction.

“That was when it switched over and it wasn’t just a party thing,” said Nunes.  “It was, everything else suffered because of it.”

Nunes spent many precious years of her life addicted to meth and found that the drug wasn’t as available as she once had known it to be. The drug took hold, and everything else suffered.

She was doing meth before school and after, just to stay up all night, and then to stay up for work the next day.

“And then pretty soon you aren’t going to work,” said Nunes. “And then you have to steal to support your habit.”

So soon, she was in and out of jail, court and psychiatric care.

In 2003, Nunes had a baby boy and ended up marrying her son’s father. She says for a while, things were good. But then she found herself become dependent on opioids, and she and her husband at the time drank a lot and fought even more.

“My daughter went to go live with her dad in Glendive, and my son ended up with my in-laws because I knew that he would be happy and safe and loved and he has been,” she said.

She says she tried to stay clean. She tried drug court.

Finally, a defining moment in her addiction.

“I ended up sitting my county time out in jail. And two weeks before I was set to get out, my husband fell off the rims and died,” she said.

At one point, all she had left was the drug.

“I just couldn’t stand to feel anything,” she said. “There was just so much loss and shame and fear and regret that here comes a point when all the drugs in the world don’t numb it anymore.”

As the impacts of meth grow in Montana communities, local state and federal partners are actively finding ways to take control of the situation.

In Yellowstone County, through Project Safe Neighborhoods 124 people have been charged federally since November 2018. Authorities have seized 346 pounds of meth with a street value of $15.6 million. Also, 96 firearms have been taken off the streets.

“We have seen an increase in drug prosecutions,” said U.S Attorney for the District of Montana Kurt Alme.

Alme serves as Montana’s chief federal law enforcement officer. So when a drug case comes across his desk, the penalties are stiff.

“Statewide the number of drug prosecutions that we have had go through this office have increased by 33 percent,” said Alme. “We are seeing some large drug-trafficking organizations and some with fairly direct links to cartels.”

Alme has locked up key members of Mexican drug cartels caught distributing and selling their product in Montana, with the help of Montana’s drug task force officers and the Montana Highway Patrol criminal interdiction team.

“It’s appropriate for us to prosecute those individuals in federal court so that they can get an appropriate sentence in bureau prisons and we can protect the public from these individuals,” said Alme.

For Nunes, a point in her life arrived that she refers to as her “changing moment.” It’s the time when addiction shifted and recovery started.

“I knew there was nothing left in that life for me but a prison sentence or a casket,” she said. “I knew that I had to do something different.”

Roughly four years ago, she said, she was basically homeless and spending time with another addict whom she barely knew, sleeping in either a motel or in a car, high on meth most of the time.

There was a warrant out for her arrest, and when they stopped at a motel, the police rolled and that was the last time she was taken to the Yellowstone County Detention Facility.

“It was the only time that I had ever been arrested when it was like a relief. It was like, I don’t have to do this anymore,” she said.

For nine months, she detoxed and then chose to change.

“Once the fog lifted a little and I wasn’t super ill, I didn’t have anybody call. I didn’t call anybody when I got to jail, not my mom, not nobody,” she said. “And it really hit me that I had sacrificed every relationship I had ever had with another human being for drugs.”

Her life now is completely different. 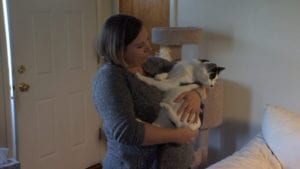 “I’ve gotten married to another person in recovery who’s good and treats me well. I have a house, I pay rent, it’s paid on time, it’s usually early,” she said. “I have a car, I have insurance, like all of these things that to most people are super normal. I didn’t do any of that stuff in active addiction. I was homeless a lot.”

Still, her recovery is never ending so she takes what she knows about addiction and puts it to use at Rimrock Foundation in Billings. Nunes now works as a Rehabilitation Technician Supervisor helping others through the painful effects of addiction to meth and other substances.

She provides structure and life skills, everything she herself also had to learn. But she also realizes the path to recovery is a different journey for everyone.