Special Report: The slogan that derailed a sales tax in Montana

BILLINGS – 83-year-old Billings resident Jim Graff has spent his career in marketing and advertising, but his real claim to fame comes from the world of Montana politics.

As an advertising associate with Sage Advertising in Helena in 1968, Graff coined a campaign slogan that lives on today as the slogan that stopped a state-wide sales tax in its tracks.

At the time, Graff was working on Forrest Anderson’s campaign for governor in 1968, when he coined the phrase “Pay More? What for!”

“It just came right out of my head, here it was right in front of me, four words…Pay more, What for?” Graff said in a recent interview.

Montana Attorney General Forrest Anderson was facing incumbent Republican Gov. Tim Babcock in the 1968 campaign, an election that came on the heels of Babcock’s unsuccessful push for a state sales tax in the 1967 Legislature.

”I knew we had a winner, but I wasn’t sure I could sell it to Forrest,” said Graff.

When he presented the idea to Anderson the next day, Anderson liked it too, but asked him what it means.

“I told him it hit right at the heart of Tim’s campaign,” said Graff.  “And he embraced it.”

The slogan captured Anderson’s belief that state government didn’t need to collect more taxes, but rather, needed to do a better job managing the tax revenue it had.

The catch phrase stuck.  It was short, sweet, to the point, and it rhymed – making it easy to remember. 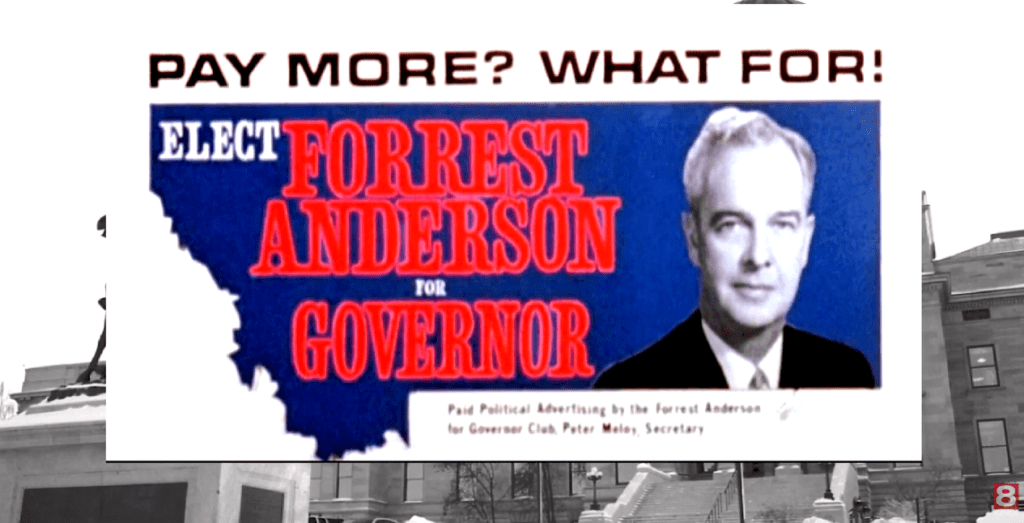 Babock’s campaign was unable to distance itself from the failed sales tax, and Montana voters spoke loud and clear.

The incumbent Republican governor lost by a stunning 12 points. To this day, Babcock is the only sitting Montana governor to lose a re-election bid.

In his biography, “Challenges”, Babcock acknowledged that his support for the sales tax cost him the election and “ended his political career as such.”

Graff, who has since retired, still lives in Billings.  He recalls those exciting days of working on the campaign.

Anderson was well known, having served in all three branches of state government. But knew he had his work cut out to defeat a sitting governor.

“He was a good-looking guy. He looked like a movie star,” said Graff.

The “Pay more? What for!” slogan lives on today as one of the most effective and memorable in Montana political history.

Although Graff still gets ribbed and kidded as the guy who killed the sales tax in Montana, he takes it all in stride.

When asked if he has any new slogans for the current political scene in America, he smiled and said, “Yes, but I’m not telling you.”