(HELENA) The Helena School District announced Wednesday that classes at Helena High School will be back in session Thursday. The school had been closed for two days because of breaks in the water line that provides most of the school’s water.

On Wednesday, crews dug into Montana Avenue, looking for the source of leaking water. Traffic was down to two lanes while the work went on.

“Thanks to the partnership with the city of Helena, we’ve gotten permission to do what we need to do,” said Helena Public Schools Superintendent Tyler Ream.

The supply line connects the school to a city water main that runs under the center of Montana Avenue. Crews found one break in the line on Tuesday, and temporarily repaired it. But they discovered there was still leaking water, coming from below the street surface, so they had to excavate sections of the street to identify and fix any remaining breaks.

Kalli Kind, the district’s director of support services, said Wednesday afternoon that workers had found and fixed another break in the line, and that they were optimistic that would be enough to restore water service.

Leaders said the broken line didn’t cause any damage to the school, but it cut off the building’s main source of water.

“Quite honestly, we can’t have students, or really anybody, in the school without having water,” Ream said.

While no one was inside the school on Wednesday, the district did manually fill the building’s boilers to keep the heating system running. They wanted to make sure the school didn’t get too cold and suffer additional damage during the closure.

In this case, the cold temperatures may actually have been a benefit. Leaders said the leaking water froze just outside the building.

“If it wasn’t for the temperatures, the water would be in the school right now,” said Kind.

Kind said the water line was eight feet below ground, so it likely did not freeze. She said the break is simply a sign of aging infrastructure.

There is no estimate yet on the cost of the repairs. On Wednesday, the district’s board of trustees voted to allow Ream to hire contractors without going through the normal procedures.

“We don’t have the luxury – or the time, quite honestly – of going through the regular bidding process,” said Ream. “We have to remediate this situation immediately.”

While these repairs will allow school to resume at Helena High, leaders say they will only be temporary. They plan to do additional work on the line later in the year.

“We’re going to have to come back at a later time, in different weather conditions, and fix it in a more permanent manner,” said Ream.

Ream thanked students, families and community members for their patience.

“This is obviously not something we planned,” he said. “We certainly really wanted to have our students and staff back in school today, but we’re not in control of those breaks.”

Ream said the district will work with the city of Helena to ensure Montana Avenue is repaired as quickly as possible. They will also work with the Montana Office of Public Instruction to determine whether Helena High will need to hold makeup school days to meet their required number of instructional hours.

This story has been updated. The original post is below.

HELENA – School officials have told MTN that classes will resume at Helena High School tomorrow, Thursday, March 7.  All breaks in the water main which supplies the school have been repaired. 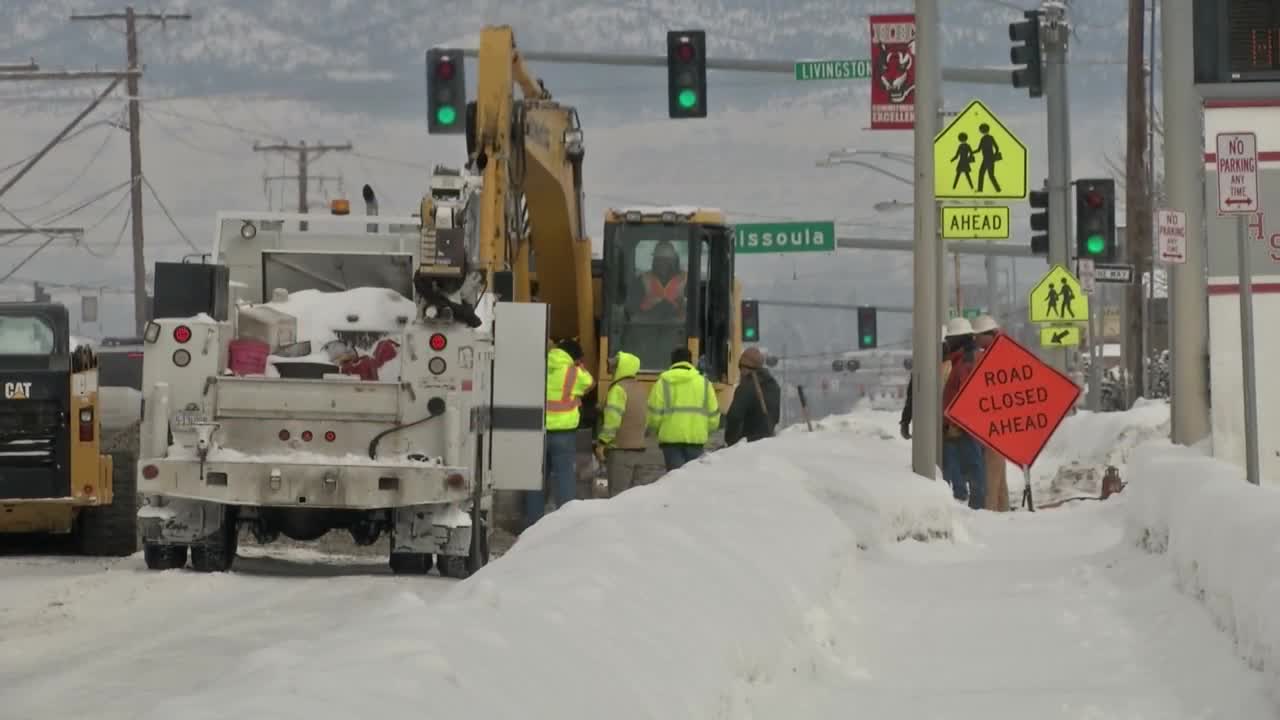 (March 6, 2019) HELENA – The decision was made to close the school Monday night after a water line burst. Crews could be seen in front of Helena High School Tuesday digging through the ice, snow and frozen ground to repair the pipe.

Superintendent, Tyler Ream says the school did suffer some damage from the busted pipe. Contractors are working to determine when they can reopen the school. Parents and staff will be notified as soon as possible.

“A water main is a difficult thing to fix to repair and the conditions in which we are trying to repair it, make it much more difficult. The break is actually near main city line, which is just off of the street and so and if you were to drive by right now, there’s an excavator that is digging up the Earth to try and get at that problem,” said Ream.

March 5 was the second day in a row that the district had to close a school because of a weather related issue.

A power outage forced school officials to close Rossiter Elementary on Monday March 4. Ream said while the building was without heat, a pipe froze causing minor damage to the school which was reopened the following day.

Ream continued, “We also have ice and snow and everything else we have to deal with we don’t know yet what our plan is for tomorrow—a lot of that is dependent on what we can get done this afternoon so we are going to try and make they call in as early as we can, based on the best information that we have from out contractors.”