Malmstrom airmen assist in three rescues in span of 13 days

GREAT FALLS – In a span of 13 days, 14 airmen from Malmstrom Air Force Base helped civilians in three different rescues.

Colonel Jennifer Reeves said that because the airmen did the right thing, the situations resulted in tremendous outcomes.

“The airmen that we send out into the world every day, out into our missile complex or out to just do what it is they do, they are used to making good decisions,” Reeves said. 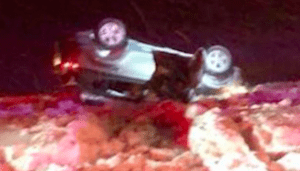 On February 20, Senior Airman William England, Senior Airman Tyler Shepherd, Airman 1st Class Andrew Page, and Staff Sergeant Roy Fajardo from the 341st Missile Security Forces Squadron were headed home when they saw flashlights on the side of the road. A vehicle had crashed and rolled.

“Once we got there, the two civilians that were standing around the vehicles told us that there was someone still trapped inside. At which point we kind of jumped into action to make sure the lady was ok,” English said.

The airmen were able to free the woman from her car. England said the woman was grateful for the help.

“The airmen are so willing to get out and help in life-threatening conditions such as this,” England said.

The airmen stayed with the woman until emergency services arrived and transported her to the hospital.

“I was just nearby the operations desk when we got the phone call about the situation with Judge John Parker,” Cafaro said.

Once they made contact with officers on the ground, they followed some tracks in the snow near a wooded area. Cafaro said they then started a back-and-forth search pattern.

“We quickly identified a series of tracks that continued to the south about two miles along the river,” Cafaro said.

Cafaro added they positively identified those tracks as human tracks when they say the footprints broke through the ice.

Since they were unable to land, Tech Sergeant Regina lowered Major Timboe to the ground.

“We did not want to move Judge Parker too much further from where he was because his feet were already quite soaked and iced over,” Cafaro said.

They hoisted Parker into the helicopter and flew him to the hospital.

“It has been a pleasure meeting the judge today. We do not expect that at all typically and it is great to see just how happy they are and how grateful they are for us to be able to go out there and help them out,” Cafaro said.

On March 4, Major Cas Smith, Major Robert Arcand and Airman 1st Class Ethan Husak of the 40th Helicopter Squadron and Staff Sergeant Richard Corpus-Munoz and Senior Airman Joshua True of the 341st Security Support Squadron were in the missile field when they spotted a car stuck in the snow.

“From where we were, it did not look like there was a road actually. We can see bits and pieces of it, but the snowdrift actually covered the parts that she drove through. That’s what ended up making her drive off the road,” Corpus-Munoz said.

Corpus-Munoz added the driver made their day because she was so happy they stopped to help her.

“I believe everyone at team Malmstrom is always making the right decision. If anything, keep doing what you are doing because we are obviously making an impact,” Corpus-Munoz said.