Missoula survey: 47% of parents scale back or quit work to care for child

MISSOULA – A record number of respondents have let the Chamber of Commerce know how they feel about child care in Missoula, and the results showed what most expected: that it is too expensive and hard to find.

They now hope that having this hard data will be the first step in finding solutions.

The Chamber released an online survey in November that targeted at parents looking for, and\or using child care services in Missoula.

With over 550 responses — the most ever gathered by a Chamber survey — more than 70% said they are using them for children 5-years-old or younger.

Respondents say they pay an average of almost $638-a-month-per-child, 3 or older, making it their fourth highest expense behind housing, transportation and food. 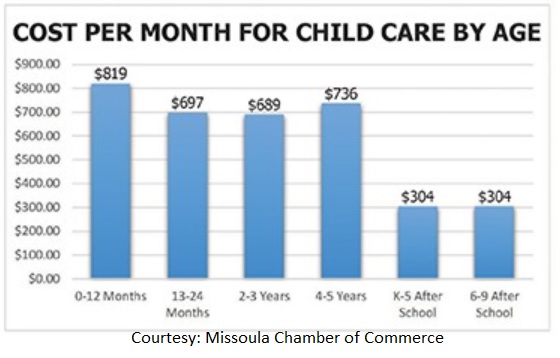 For those with infants, it’s even more difficult and spendy at $829 a month per child, making it the second highest expense for those families.

The Chamber says this combined with the rising cost of living can create the perfect storm for new parents.

The average cost to rent a three bedroom home in Missoula was already over $1,100 in 2017, and those expenses combined equal over 50% of pre-tax income for families earning the median of just under $42,000 a year.

They estimate that a family would need to earn almost $58,000 a year to afford this along with other basic expenses.

To combat this, 47% of people who took the survey say they’ve either cut back their working hours, quit altogether, or are planning to do so.

Cost was the top complaint with 82% of those polled saying it’s too high while 47% said scheduling care to match work schedules is their biggest complaint, and 43% said their main issue is the quality of child care available. 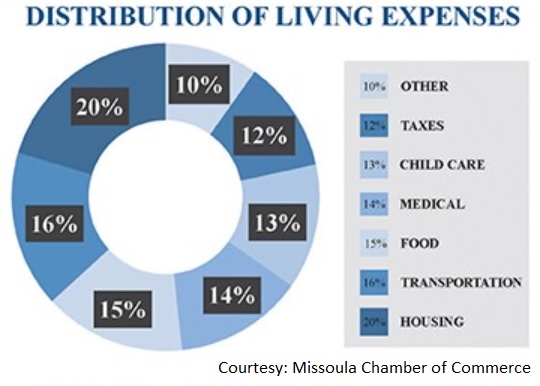 Chamber Director of Government Affairs Matt Burson says their goal with all this is to raise public awareness, backed up by hard numbers.

The next step is working with community leaders to find solutions.

“Once we got the data back it shows: It’s super expensive, it’s hard to come by, and people all over the city are looking for childcare,” Burson said.

“So, just that public awareness is the first step, and now we start working with community partners. Folks that are interested in finding solutions and looking for ways that we can increase the amount of child care,” Burson added.