BILLINGS- There is a new tool being used by the Montana Highway Patrol that is likely to take the agency’s crash investigations to a new level.

“It really allows us to capture the scene from every angle,” said Trooper Aaron Freivalds.

The agency started using drone technology in the summer of 2018. Now, each district in the state has a drone and pilots licensed to fly them. Billings and Great Falls districts were some of the first to get the drones and start using them when it comes to fatal crashes.

So far, the Billings District has used its drone in eight deadly crashes. 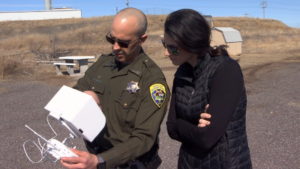 “It’s always been an interest and a hobby of mine,” he said.

Ever since he was a kid, Freivalds has been interested in remote-controlled technology.

“I like them. I have personal drones,” said Freivalds. “I’ve been flying RC planes and helicopters and now quadrocopters since I was about 10 years old.”

He was instrumental in introducing the patrol to the use of drones, hoping to answer questions sometimes left behind in crashes.

“Some investigators used to have 20-foot poles,” he said. “Now we can quickly just go right above.”

The drones have cost roughly $3,000, but Freivalds said that’s pretty affordable considering technology costs as a whole, that the Montana Highway Patrol uses.

And now, crash investigations are coming a long way.

“Back in the ’80s, pre-digital cameras, we would have rolls of film at a crash. You would take maybe 12 pictures of a scene,” said Freivalds.

Now, what the highway patrol is learning can be better accomplished from the air and quicker.

The drone is able to take high-resolution photos and video and then take that data and create a 3D environment.

“Now we are having a 3D virtual environment, where we can walk through the scene again after the fact,” he said.

The max altitude of the drone is 400 feet, meaning there is no disturbance to aircraft in flight. On top of that, the drone operator has to secure a flight path from the airport before going up in the air.

That process takes only about five minutes.

“It is not a sneaky little tool that people will not be aware of is being flown,” said Freivalds.

The angles above the crash scene are endless; something the patrol says is helpful in particular when it comes to skid and tire marks.

“Where it really comes into play that we’ve noticed is in the tire marks. As the vehicles are sliding across the road, there is a lot of shadowing,” he said. “That gives us a better idea of what the vehicle was doing even earlier.”

Still, as the drone technology starts to take off, Freivalds knows it can always change course. Navigating a new technology is one thing, implementing it into crash reconstruction is an added element.

“It really allows us to capture the scene from every angle and this tool has really helped us,” he said.

In the future, the patrol hopes to use its drone for hazardous materials spills or search and rescue operations.