GREAT FALLS – The Sense-Ability School for children with autism is celebrating its one-year anniversary by hosting an open house. 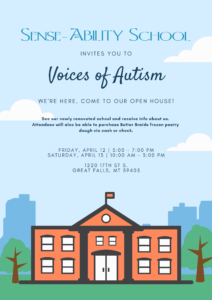 Throughout the year, the school board raised over $70,000 through fundraising and donations.

“Every single person I spoke with has a person with autism in their family or knew of someone with autism. The need is so prevalent even in our little Cascade County that I knew I kind of found my passion,” Jennifer Jones, board vice president, said.

With the donations, the school has transformed into a place for students to learn and receive therapy or counseling. The school is on its way to being fully ADA (Americans with Disabilities Act) approved.

Jones said she got involved “to give children who might have struggles in a public setting, an alternative.”

Jones said her daughter has autism, and at a young age she was told not to set the bar too high.

During the open house, Jones’ daughter will talk about her latest project: Voices of Autism.

“My daughter and a fellow board member’s daughter helped create a voice for children with autism. They are both young adults and they have heard it all. They’ve been called whatever names, they’ve been labeled. They wanted to create an interactive exhibit for things they want people to know and say,” Jones said.

Jones said she hopes they can expand and eventually be known across the state.

“We can all celebrate that there are people with autism in our lives. I’ll tell you, I am a much better person by having a child with autism and being around children with autism,” Jones said.

The school is located at 1220 17th Street South. All are welcome to attend.

For more information about the school, you can click here.