Driver arrested, no one seriously hurt after high speed chase and crash in Missoula 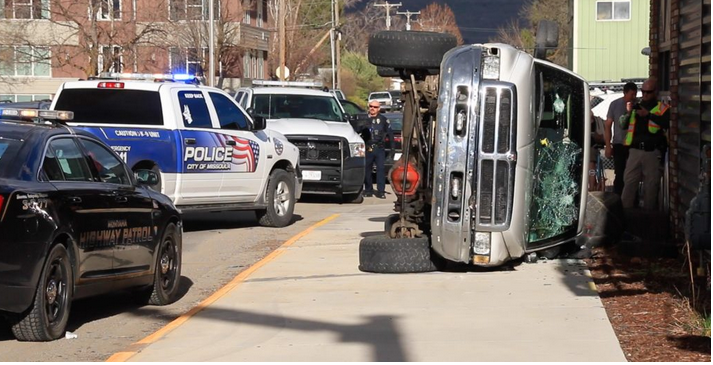 (MISSOULA)- Imagine finishing a relaxing evening out for a pizza with your family, and nearly being crushed by a truck crashing at the end of a high speed chase.

That’s what happened to a Missoula man tonight after a crosstown chase ended shortly after 6 pm.

Missoula Police tell us the chase started as officers were checking out the report of suspicious activity and a pickup leaving the scene of a house at Wyoming and Catlin off Russell Street.

When officers tried to pull the pickup over, the driver took off, leading patrol cars from the city and Montana Highway Patrol on a high speed chase through several streets, then through the parking lot at Southgate Mall. That’s when the suspect clipped another car in the intersection and flipped onto its side. Just as Josh Rollins and his family were leaving Bridge Pizza.

“We heard a squeal and a loud crash and turned and saw the Dodge pickup behind me coming towards us and rolling up on its side,” Rollins explained, still a bit shaken. “My wife and I and our 8-year old kind of tried to get away and got pinned up between the building and it. As soon as it didn’t roll over, next thing we knew the guy was jumping out of the truck and a police officer was shortly behind him following him with the guns. They went around the corner and my wife and daughter and my oldest 16-year old son jumped through the drive through window. They’d let them in.”

While the Rollins family took cover, former restaurant owner Russ Hage saw the takedown as he was working in a storage unit behind the behind the building.

“And I was in the alley and I looked up and this real stocky guy came running around the corner with the policeman behind him. The policeman managed to get him down and get on top of him. And I was going for my bear spray in case he needed help. And then another policeman came and helped subdue him. The guy was hollering. I couldn’t understand what. They got him cuffed and he settled down.”

Fortunately no one was hurt. MPD was still checking to see if there had been other property damage during the crash, but tell me the suspect is being held on felony charges for leading police on the chase. And he may face additional charges of criminal endangerment for putting others’ lives at risk, especially with the crash.