Now that USS Billings commissioning date is set, fundraising is ‘full steam ahead’

BILLINGS- It’s a ship made to withstand the test of time.

But before the USS Billings can set sail, it needs a proper send-off. And benefactors in Billings must plan and pay for it.

“We’ve been working on this for probably a year and a half trying to get to this point, now the excitement is starting to build,” said Yellowstone County Commissioner Denis Pitman.

The fundraising hit full sail Tuesday when community members launched a fundraising event at the downtown Billings Historic Depot, where 120 passengers took a train ride east to Pompey’s Pillar and back.

“So Burlington approached us and gave us the opportunity to do some fundraising for the USS Billings,” said Pitman.

Selling tickets for the event at $100 each was a breeze, as the event sold out fairly fast.

“Now the excitement is starting to build. The community is getting excited. They’re buying the hats, they’re buying the challenge coins and the shirts and stuff like that, so it really is generating some positive outcomes,” said Pitman.

The train for the fundraising ride was donated by BNSF, which also donated a check for the cause. It came fully restored for passengers, with food and drink served also as a courtesy of the railroad.

Billings resident Marie McHatton surprised her husband Dan with tickets to the event.

“I think it’s incredible that Billings got a ship named after it,” she said. “My dad is Navy and my son is Navy and my husband was Army, so I surprised him with tickets tonight.”

The U.S. Navy has announced that the USS Billings will be commissioned on Saturday, Aug. 3 in Key West, Fla. The USS Billings is the 15th in the class of Littoral Combat Ships, which are known for their speed and versatility.

The ship will mostly operate in waters close to shore once it heads into action later this summer.

“The Navy finally made it official that Aug 3 was going to be the commissioning date down in Key West. So we’ve got a lot more planning. We’ve been putting all the little details together as we get closer to that date,” said Pitman. 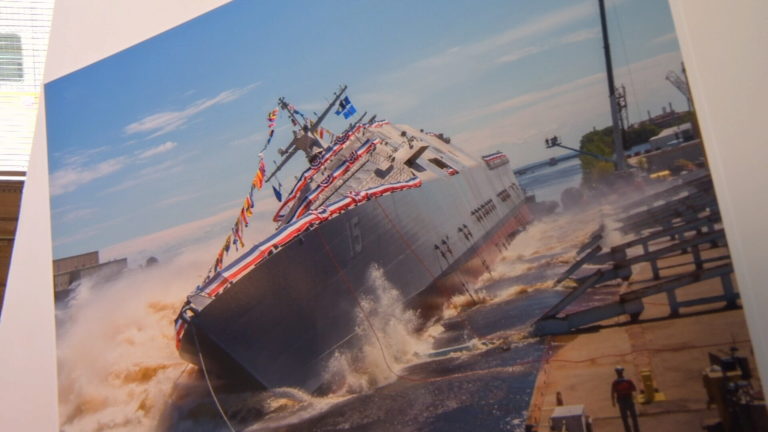 “We are responsible for four significant events for the commissioning,” said Cole.

For Tuesday’s train fundraiser, each ticket put another $10,000 into the coffers.

A fundraising committee of volunteers and business leaders say throwing the USS Billings a party in Florida will cost upwards of $300,000.

The good news is, leaders say as they plan for the Aug. 3 commissioning, things are moving along with a location and a menu already set.

Click here to watch a live interview at the event with Cole.