HELENA – Family, veterans and members of the military gathered at the Capitol Rotunda on Friday, May 10 to honor the work of two Carroll College Graduates and commission them as new Army officers.

Jackson Marsh of Plentywood, MT and Chase Eriksson of Salt Lake City, UT were both commissioned as Second Lieutenants for completing their ROTC training.

Both newly commissioned officers say they are very thankful for being a part of ROTC.

“ROTC is almost like a family really,” said Eriksson, “Everyone is just kind of there for each other and it’s a lot of hard work but ultimately it’s fun.” 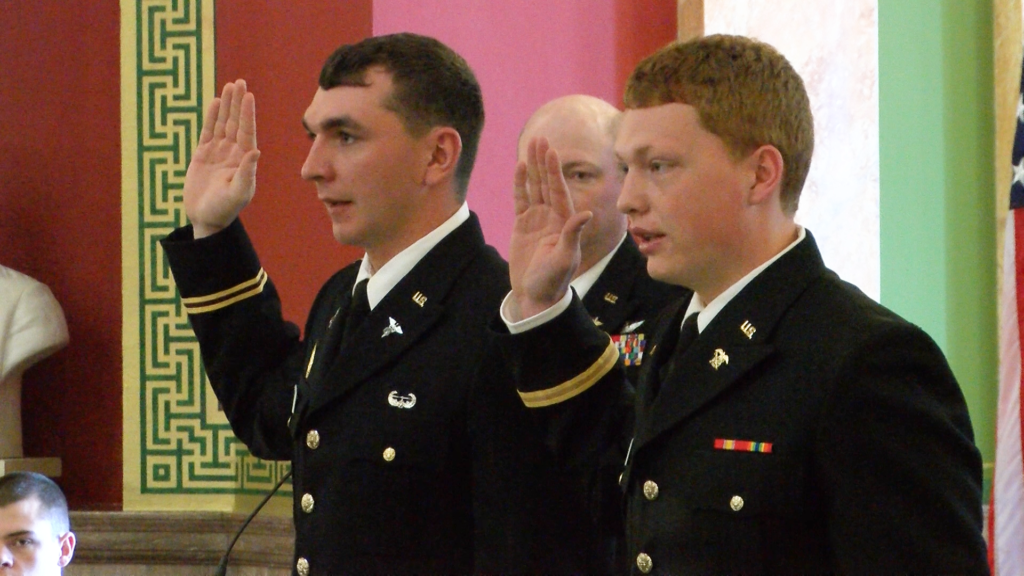 Eriksson played for the Carroll Men’s Soccer Team and will be working on a Master of Business in Salt Lake. Eriksson will still be drilling with the Montana National Guard in the 495th Combat Sustainment Support Battalion based out of Kalispell.

Marsh, a former Carroll Football linebacker, will be be at joining the Idaho National Guard and attending Idaho State for Physical Therapy.

“It’s almost like a sports team,” said Marsh, “Any time I was feeling down or I wasn’t quite there, I always had somebody there picking me up and that was really the best part.”

“I’ve got to see the growth they’ve made from freshman cadets to now being officers. They’ve worked very hard and I’m proud of them,” said Thompson.

Erin Reich was also slated to be commissioned on Friday but was postponed to July due to a knee injury preventing her from completing her final training. Reich was a Carroll cheerleader and will be graduating with a Bachelor’s in International relations.