BOZEMAN – The drug epidemic, from meth and heroin to prescription drugs and opioids, continues to rise across the country.

Teams like the Missouri River Drug Task Force go undercover to try and stop it but it is an uphill battle.

The task force works around the clock trying to curb the presence of dangerous drugs like meth and heroin, stopping them at their source.

As times change, the battle gets tougher.

“We’re here for our communities,” says Capt. Ryan Stratman, commander of the Missouri Drug Task Force. “We are here for all of the seven counties that we work in.”

It’s a scourge that has been labeled an epidemic across the entire United States. 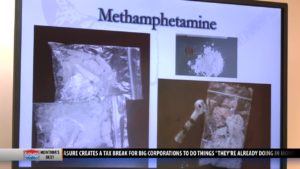 Commander Stratman says having dangerous drugs like methamphetamine is almost never the only crime.

“A lot of these crimes that we estimate in the 90 percentile of the crimes committed revolve around drugs and alcohol,” Stratman says. “The opioid crisis is growing and just as we haven’t seen all of the growth that other areas in the United States have seen, we are slowly behind the curve in Montana when it comes to our higher populations and some of the problems that come with that.”

When it comes to stopping the worst, Commander Stratman’s undercover officers are the first to investigate.

“These are long, complex investigations with multiple individuals involved,” Stratman says. “They’re hard workers and they take this job on and they take it seriously.”

The officers say the drug epidemic applies to many drugs, including opioids, marijuana, meth, and heroin.

According to the task force, the concern with marijuana lies in the THC level.

Back in the ‘90s, they say the drug used to have seven percent.

Present day, bump that up to 30 to 40 percent with marijuana products like wax and shatter bumping up to 90 percent.

With meth, though, they say the concern is steeper as it has become easier to purchase.

The task force says seven years ago, a gram cost about $180.

Looking at today, three-and-a-half grams could have a street cost of $50 to $80.

And while labs are less prevalent, 90 to 95 percent comes from Mexico.

The task force says prescription drugs are also a big problem and they are easy to get so drug drop-off boxes are very useful.

Still, when it comes to the overall drug epidemic, they say meth is the larger issue.

“Our number one drug that we investigate is methamphetamine,” Stratman says. “Methamphetamine is absolutely the epidemic that we continue to see in Montana. It’s prevalent here and that’s our focus in our investigations is to stop the meth from coming into the state. We target those individuals bringing it into our communities.”

And, as the task force hopes, some public education that could make a difference in Montana.

“When you hear of the opioid crisis or you hear of a drug epidemic or you hear of methamphetamine, now you have some understanding of what the task force is and what they do,” Stratman says.

The commander adds that any report of suspicious activity from you can also go a long way to help their mission.