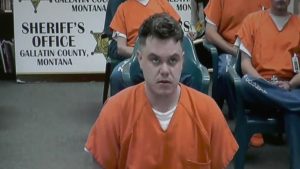 BELGRADE – A Gallatin County man is facing aggravated burglary charges after he allegedly broke into his ex-girlfriend’s home and threatened to kill her early Friday morning.

According to charging documents, Jesse Dale Brown, 23, was arrested after running away from law enforcement at approximately 3:12 a.m. Belgrade Police officers were responding to a report of a disturbance on E. Rosebud when they saw a man matching the description of the suspect and tried to question him.

The victim told officers that she had broken up with Brown over a month ago and that he was not allowed to be in her home. She told officers she had some friends over, when Brown broke the window to her bedroom, entered and began to punch a friend multiple times in the face. Brown reportedly ran from the house after being pulled off the friend, only to return through the window. He then allegedly began to threaten to “kill” the woman and her friend.

Brown was seen in Gallatin County Justice Court on Friday. His bail was set at $15,000 and his next court appearance is scheduled for May 24.

Reporting by Ken Spencer and Cody Boyer for MTN News