GREAT FALLS – Young professionals from across the Electric City came together Saturday for BaseCamp 2019: a first-of-its-kind expo where they could network and find ways to become more involved in the community.

“No more thinking, ‘Great Falls doesn’t have anything,’” said a promotion for the event. “We will change your mindset and help you grow with our city.”

The expo was held at the Civic Center and was organized by a wide range of people, from local government officials to Great Falls business owners. Kicking off at noon, the festivities included a performance by local music artist Melissa Dascoulias and traditional Native American dancing organized by Jordann Lankford-Forster of Great Falls Public Schools.

A discussion ensued regarding housing availability in Great Falls (dubbed “HGTV vs. Reality”), and Kim Martin, of Dahlquist Realtors, helped lead the dialogue. A recurring theme highlighted the housing affordability in Great Falls relative to places like Missoula and Bozeman; in fact, Great Falls boasts a much smaller ratio of housing costs to income. 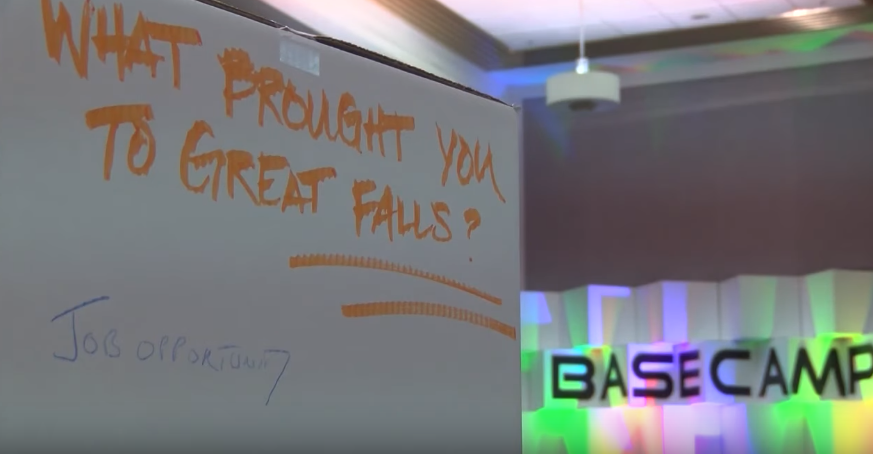 “Ted Talks” were given by representatives from volunteer groups as well as the Great Falls Citizens Academy, and a panel of outdoor recreation experts contributed to a conversation about what Great Falls brings to Big Sky Country. They made it a point that Giant Springs State Park is the most visited state park in Montana.

Cascade County District Judge Greg Pinski also spoke about how he has seen the opioid crisis impact the community.

BaseCamp was inspired by ideas from the “Future of the Falls” forums held in Great Falls last winter. City Commissioner Mary Sheehy Moe and Mayor Bob Kelly created the forums in an effort to identify and address the grievances of Great Falls residents — particularly young people.

“How can we attract entrepreneurs? How can we bring higher wage jobs into the community?” Moe told MTN News in November after evaluating the results of the forums. “We […] want to make sure that we’ve talked to young people who’ve done just that.”

Tahnee Peppenger, a provider recruiter for Benefis Health Systems (the largest local employer), also serves as BaseCamp’s marketing chair. She told MTN News she hopes this year’s event is just the beginning of a new tradition of providing an annual “snapshot of the Electric City.”

“Great Falls is my hometown, and I’ve always wanted to be able to give back to my community,” she said. “We hope that we will be able to create new relationships [and] help people network with other community members that are doing really interesting, really awesome things.”

Peppenger not only foresees BaseCamp as a means by which to connect newcomers, but she also plans on directing the group toward tackling some of the biggest challenges facing the community.

“We also hope to start taking on bigger tasks to help improve Great Falls and to help propel us forward to the future,” she said. “We hope to start tackling some economic development opportunities as well, and we ultimately just want to make our community more attractive.”

As an airman at Malmstrom Air Force Base, Barret Stewart resonated with BaseCamp’s message from the newcomer perspective. “People come from Chicago or New York or Pennsylvania, [saying], ‘Oh my goodness, there’s nothing to do,’” Stewart said. “And that’s not the case. There’s so much to do here.”

Stewart elaborated on the myriad of activities available to residents of the Electric City, calling it the central hub of art and recreation in Montana. “You can branch out from here and pretty much go anywhere in a three-hour radius,” he said.

Stewart, the local government committee chair, added that BaseCamp’s primary objective remains to change the narrative about what Great Falls has to offer.

“Great Falls has its own mantra,” he said. “We’re not Bozeman. We’re not Missoula, and we don’t want to be — because the world doesn’t really need another Bozeman or Missoula.” Stewart pledged to play a part in keeping that message alive and kicking.

“Every year we’re going to put this thing on, and [people] are going to have the opportunity to come and engage,” he said.