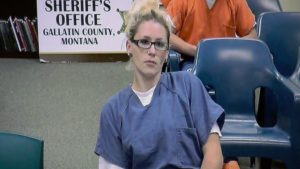 BOZEMAN – A Bozeman woman is behind bars after investigators say during a disagreement about a trailer, she pulled out a gun and fired a “warning shot” at her mother.

According to court documents, deputies responded to a call about shots fired on Homestead Road Thursday night.

When they got there, they found out that Moss and her mother had an argument after Moss drove there to pick up a trailer.

Investigators say Moss later saw her mother driving with the same trailer and had her friend cut her off with his truck.

When she got out of the car, Moss is accused of taking out a handgun and firing a shot at the trailer, calling it a “warning shot.”