Bozeman woman accused of drug possession while driving with child

BOZEMAN – A Bozeman woman was arrested on Sunday after police allegedly found methamphetamine, heroin, and prescription narcotics in her vehicle while she was driving with her 13-year-old son. 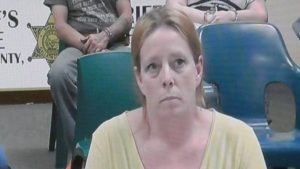 The officer stated that Gulden’s driver’s license status came back as suspended when he checked the vehicle’s license plate and registration information.

The officer conducted a traffic stop and reportedly observed a box of syringes behind the driver’s seat and a boy in the passenger seat who Gulden identified as her son, age 13.

Court documents state as Gulden exited the vehicle, the officer observed a glass meth pipe with white residue in the door.

According to the officer, Gulden waived her rights and denied having knowledge of any illegal items in her vehicle. She denied consent to search the vehicle, the officer said.

The officer’s canine partner detected the presence of illegal drugs after conducting a sniff of the vehicle’s exterior, according to court documents, and Gulden was placed under arrest.

The officer reported that along with the glass pipe, a baggie of meth, two spoons with heroin residue, and a prescription bottle of Suboxone were found in Gulden’s vehicle after a search warrant was obtained.