Firefighters responded to the corner of Last Chance Gulch and Lyndale on Friday to help raise money for muscular dystrophy research through their “Fill the Boot” fundraiser.

“This is a big deal for us,” said Firefighter David Gambill. “We’ve got some local kids here that are affect who mean a lot to us and we’d like to help them out.”

When crews started collecting donations they were drenched with pouring rain.

Helena firefighters collecting donations said they they weren’t going to let a little, or in this case a lot of water, stop them from helping a great cause.

“We’re going to do this rain or shine for sure,” said Firefighter David Maslowski. “We hear from these kids that are a part of the Muscular Dystrophy Association and they thank us every year for sending them to summer camp.” 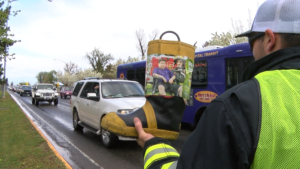 For 65 years the International Association of Fire Fighters have partnered with the Muscular Dystrophy Association (MDA). Each year tens of thousands of firefighters across the nation participate in raising money with the hopes of eventually help finding a cure for muscular dystrophy, ALS and other neuromuscular diseases.

Money from the event also goes to sending children affected by muscular dystrophy to MDA camp.

“The firefighters with their support and selflessness are just amazing. We appreciate their support and compassion for helping Fill the Boot and the support Helena has shown,” said Jeri Delys with MDA Montana.

$20 million was raised nationwide by “Fill the Boot” fundraisers in 2018.