“On the evening of May 20th made a mistake. I was at the stop light at Euclid and Last Chance, when I accidentally nudged the back of a car that was stopped in front of me.  The contact was so light that I did not realize I had made contact with the other vehicle The light turned green and I drove on with the traffic. As I was driving down the road, the driver of the vehicle I had bumped followed me and honked at me to pull over. We pulled over at the Vann’s parking lot.  The driver showed me where my vehicle had caused very minor damage to her rear bumper. There was no damage to my car. The driver did not seem to be injured or hurt in any way.

The driver said she recognized me and knew who I was.  I gave her my card and told her I would pay for any damage to the vehicle at any repair shop of her choice.  We shook hands, and she seemed satisfied with my offer. I sat in my car at the Vann’s parking lot as I watched her drive off.  I then called my wife at the VA to tell her what had happened and drove home. I followed up with the woman whose car I damaged the next day to see if she had gotten a chance to assess the damage or book an appointment to repair her vehicle and she had not yet had a chance to book an appointment.”

On the afternoon of the 23rd, I was presented with two citations that arose from this incident. The first one was careless driving and the other was for leaving the scene of the accident. I plan to plead guilty to careless driving on Tuesday, and not-guilty to leaving the scene of the accident because I did not leave until after the other driver left.”

According to Hagen, a 35-year-old woman from Butte reported that she was headed south on Last Chance Gulch when she stopped before turning on to Lyndale Ave. Police say when she stopped, she was struck from behind by a Mazda CX-5. According to the report, the Mazda continued west on Lyndale.

Police say the driver who was hit was able to catch up to the driver of the Mazda in a parking lot on the 300 block of Euclid. The driver reportedly provided a business card identifying him as Wilmot Collins and then left the scene.

Police say they met with Collins and the woman on the night of the crash, that both cars suffered minor damage and no one was injured.

Collins was served with the citations on Thursday

Both citations are misdemeanors. Collins has been ordered to appear in Lewis and Clark County Justice Court on May 28th.

Collins is currently running for U.S. Senate as a Democrat. He was elected mayor in 2017.

We have reached out to Mayor Collins for comment, we will let you know when we hear back. 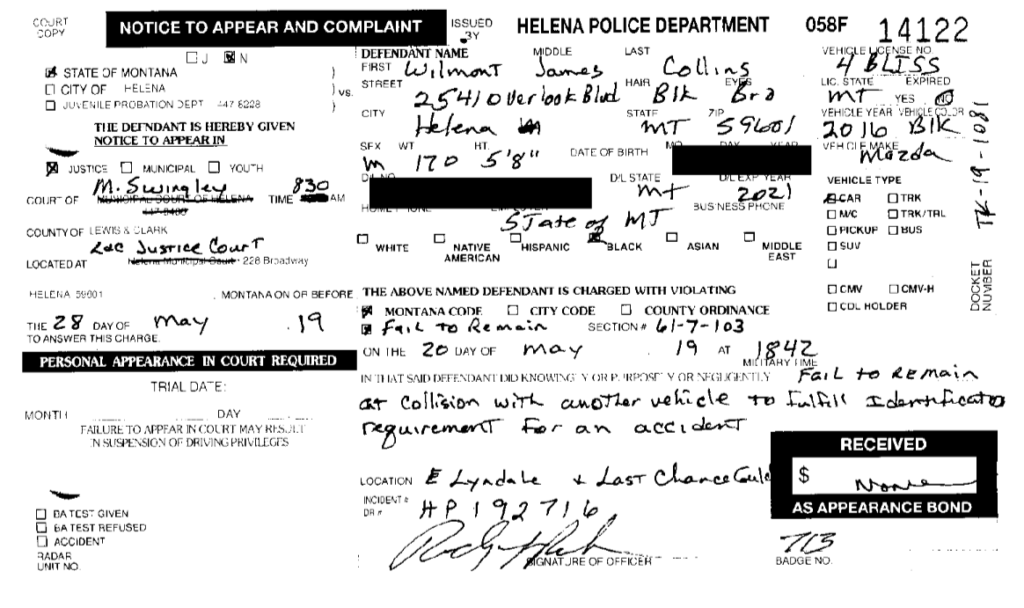