(HELENA) At 11 a.m. Saturday, for the first time in nearly six months, Helena’s Great Northern Carousel opened its doors to welcome the public for rides.

“It’s going to be good to see people on it,” said business operations manager Trish Thompson. “We’ve tested it a few times, but not with people on it, so I’m really excited to do that.” 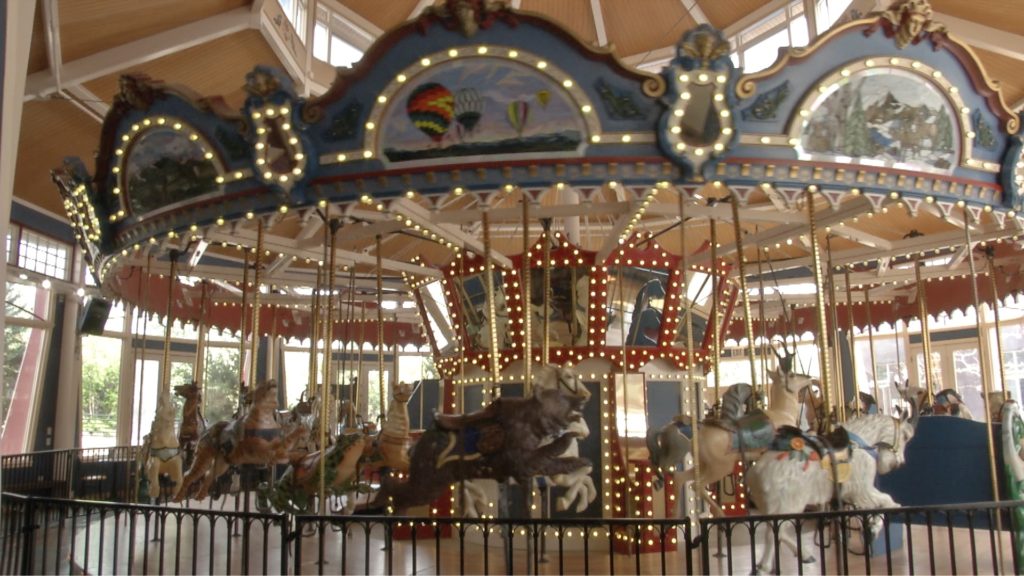 Eight-year-old Madison Posewitz and her four-year-old sister Charlotte were among the first kids to take a ride Saturday morning. Madison rode in a spinning seat, while Charlotte rode on a carved leaping wolf.

Also among the first riders were Robbie Radakovich and his two-year-old daughter Keeley.

“She loves riding ponies,” Radakovich said. “She rode a pony last week – a real one – and we’ve been waiting for this anxiously to reopen.”

The Great Northern Carousel closed down on Jan. 1, to begin extensive renovations. The carousel has been operating since 2002, when it was opened by Alan and Nancy Nicholson.

“Really, it was time for it to shut down and just get an overhaul,” Thompson said.

Since January, managers made technical improvements to the carousel itself, as well as working on the building that houses it. Each of the carved animals – including Montana natives like the grizzly bear, bison, bighorn sheep and trout – was repainted by hand.

“We kind of want it to be a surprise when everyone comes in, something new and different to see,” said Thompson.

Thompson said she heard from many in the community who couldn’t wait to see the carousel running again.

“We’ve had people walking by, people calling,” she said. “The kids are the best: They’ll stick their faces up to the glass and get all excited. I’ve visited with them about coming back to the carousel, so I’m excited for today.”

At least from those who came in Saturday, the reopened carousel is getting good reactions. Robbie Radakovich said Keeley enjoyed it more than the last time they had ridden it.

“She was really afraid of it because she was too young to understand, but now she loves it,” he said.

Cori Radakovich, Keeley’s grandmother, was visiting from Fort Peck and said she was impressed.

“I think it’s amazing,” she said. “I really liked the frog!”

Madison and Charlotte Posewitz summed it up.

“I love the carousel!” they said.

The carousel will now be on its summer schedule through the Labor Day weekend. It will be open seven days a week – from 11 a.m. to 6 p.m. Monday through Saturday and noon to 5 p.m. on Sunday.

While the carousel is already open for business, there will still be a grand reopening event Saturday, June 1, featuring live music, food and other activities.