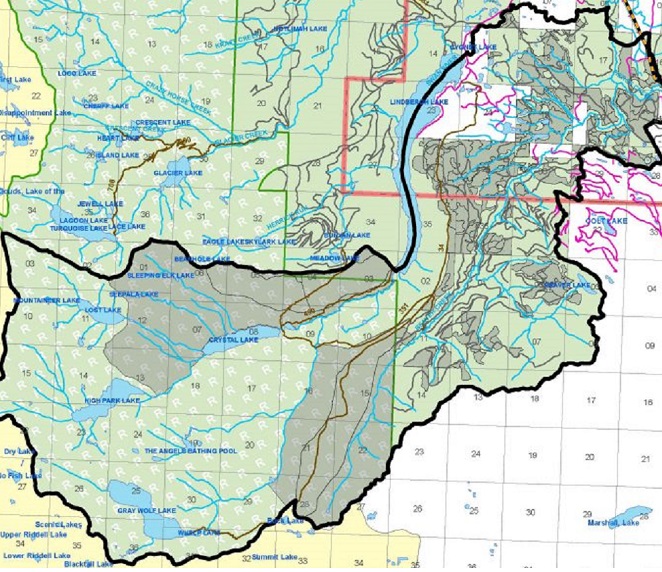 A Swan Valley fuels project will move ahead after the Flathead National Forest squeaked out an appeals court win.

On May 10, a panel of the 9th Circuit Court of Appeals ruled against four regional environmental groups who insisted that the Flathead National Forest hadn’t done enough to protect wildlife in its plan for the Beaver Creek Landscape Restoration Project.

The 35,000-acre Beaver Creek Landscape Restoration Project is south of Lindberg Lake and involves 1,780 acres of prescribed burning, most of which is in the Mission Mountains Wilderness; construction of almost 6 miles of road that is supposed to be reclaimed at the end of the project; and 2,900 acres of logging, two-thirds of which will be commercial. Half of the project area covers the Mission Mountains Wilderness.

While the appellate court sided with the Flathead NF, the justices also pointed out that the agency hadn’t done what it was supposed to do.

The environmental groups – Friends of the Wild Swan, Swan View Coalition; Alliance for the Wild Rockies and Native Ecosystems Council – had challenged the project in August 2017 in Missoula Federal District Court saying that by building more roads in the project area, the Flathead NF wouldn’t follow its own forest plan. The groups appealed in July 2018 after Missoula District Judge Dana Christensen ruled in favor of the Forest Service.

The Beaver Creek area overlays two of the grizzly bear management units of the Northern Continental Divide Ecosystem, so the Flathead NF is supposed to limit road density under Amendment 19 to its forest plan. In areas of high road density, grizzly bears have poor survival due to more human conflict.

The Flathead NF was also supposed to limit road density in moist areas for elk. But the project analysis didn’t identify where those areas are.

Even so, the justices didn’t remand the project back to the agency to require reassessment, because they accepted the Forest Service’s explanation that most moist areas of the project exist in wilderness and roadless areas where road density isn’t a concern.

Keith Hammer of the Swan View Coalition said his organization was disappointed.

“We were surprised at the ruling having watched the oral argument. Seemed like (the justices) basically said we’d win on the issue of the wet areas for elk. They ended up ruling against us but kind of put a footnote in the opinion to the effect that ‘the Forest Service didn’t cover this well, but we’re going to give this to them anyway,’ ” Hammer said.

Hammer said he knew the case might have a problem due to a legal practice called “Aure deference.” That means that when both sides of a lawsuit have roughly equally persuasive arguments, federal courts will defer to the “expertise of the federal agency.”

“The public assumes the courts are there to listen to the truth and deal out justice. But the Forest Service understands that they just have to give a plausible explanation and the courts will defer to them,” Hammer said. “It makes forest plans basically worthless if we can never enforce them.”

But the forest plan may still have significance because Flathead National Forest still has one lawsuit yet to defend. The environmental groups also challenged the 37,320-acre Glacier Loon project, which sits just north of the Beaver Creek project. That project would log 1,400 acres and build almost 6 miles of road.

The groups may have more of a persuasive argument there, because Missoula U.S. District Judge Donald Molloy agreed with them that the Flathead NF had not thoroughly assessed the project’s effects on bull trout and wolverine. In this case, it was the Forest Service that appealed.

The 9th Circuit will hear the case on July 10.

In the meantime, the U.S. Supreme Court could rule against the practice of Auer deference after hearing arguments at the end of March in Kisor v. Wilkie.